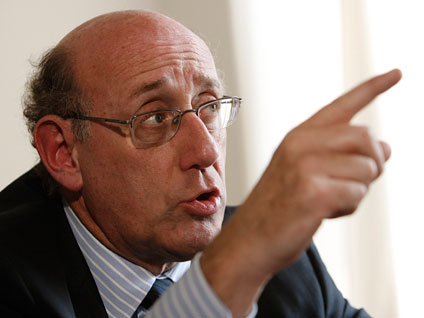 It is estimated that as many as 100,000 people die every year from medical mistakes. Yet most of the time, very few people ever know about it.

That changed earlier this year when surgeons at Duke University Hospital transplanted a heart and two lungs into 17-year-old Jesica Santillan in a rare and difficult operation.

The hospital admitted what few hospitals ever admit: It had made a mistake. Correspondent Ed Bradley reports in this story that first aired last March.

It was a tragic mistake. Surgeons had given Jesica Santillan donated organs with the wrong blood type, causing her body to reject the new heart and lungs, and her system to shut down.

Two weeks after the operation, she received a second transplant - this time with the correct blood type. But it was too late to save her life.

How could this have happened, especially at one of the most prestigious hospitals in the country?

Nobody knows the answer better than Dr. James Jaggers, the transplant surgeon who put that heart and those lungs into Jesica.

Dr. Jaggers, a highly regarded chief of pediatric cardiac surgery at Duke, has performed more than 100 heart transplants. He says that everything was going smoothly during the operation until five hours into it, when he got a call from a technician in the immunology lab saying that something was terribly wrong. Jesica's blood type, type O, did not match the blood type of her new organs, which were type A.

At that point, Dr. Jaggers says, "We had already put in the new organs and we had actually come off the heart-lung machine, off bypass. And we were planning to get ready to close the chest and move up to the ICU. And it was about that point, about an hour, an hour and 15 minutes after we had put the organs in, that we got the call that this was an incompatible transplant. And we, of course, knew what that meant at that point."

What that meant was that Jesica's life was in serious danger. The antibodies in her blood began attacking and destroying her new organs, and she later slipped into a light coma.

Dr. Jaggers says he was devastated: "It's almost like a death and dying reaction. It's that deep, sort of sinking feeling, and it's a completely helpless feeling — that there's absolutely nothing you can do about it."

Then, he had to tell the family what had happened: "I think my exact words were that there has been a problem, in that the organs we put into Jesica were type A organs and she's type O, and that's an incompatible transplant, and it's something that we didn't plan to do. It's an error. But we're going to do everything we can to make this work."

Jesica had been on the brink of a medical miracle. She came to the United States from Mexico four years ago, smuggled into the country illegally by her parents in search of treatment for a life-threatening heart and lung disorder that doctors in Mexico could not fix.

They moved to North Carolina, and lived in a trailer. The family's plight caught the attention of a local builder, Mark Mahoney, who started a charity that raised money to get Jesica a transplant at Duke. The young girl was filled with hope.

How did an operation performed by a team of expert surgeons go so wrong?

What it came down to was a failure to communicate basic information. Not one of more than a dozen people working at Duke Hospital and at the two organizations responsible for getting the new heart and lungs to Jesica ever cross-checked her blood type before the surgery to see if it was a match with the blood type of the donor.

Ralph Snyderman, chancellor for health affairs at Duke Hospital, says, "We take responsibility for our part in that error." He says that what was missing was a system of redundant checks, which would have prevented a single mistake from leading to a tragedy.

The events were set in motion when Dr. Jaggers received a phone call in the middle of the night. Carolina Donor Services, the local agency responsible for placing organs with compatible recipients, said it had found a donor in Boston for another one of Jaggers' patients. Dr. Jaggers said he couldn't use the organs for that patient, and asked the agency if the heart and lungs would be appropriate for Jesica Santillan. Several hours later, he was told he could have the organs.

Carolina Donor Services says Dr. Jaggers was informed of the donor's blood type. But Dr. Jaggers has no memory of them talking about it. He did not ask for any blood type information, he says, because "I had satisfied in my own mind that if they had offered the organs for me that she was a match."

He is still agonizing over that conversation. "I'm ultimately responsible for this because I'm Jesica's doctor and I'm arranging all this," he says. "But honestly, I look back, and yeah, if I'd made one more phone call or if I had told somebody else to make a phone call or done something different, maybe it would have turned out differently. But you know, those are all 20/20 hindsight."

As soon as Dr Jaggers found out that a heart and lungs were available for Jesica Santillan, he sent a member of his transplant team, Dr. Shu Lin, to procure them from the New England Organ Bank in Boston.

While he was there, Dr. Lin was informed of the donor's blood type at least three times. Incredibly, he'd never been told Jesica's blood type, and so he didn't know the organs were a mismatch. And that was yet another flaw in the system, according to Dr. Duane Davis, head of Duke's transplant unit.

"Should we as a group have made it mandatory that the procuring surgeon knew that? Yes. But it wasn't Dr. Lin's fault that he didn't know, because that information wasn't conveyed to him," says Davis.

From the donor to the recipient there must have been at least a dozen doctors and nurses from Duke who were involved. Why did not one among them see that the donor didn't match the recipient?

Dr. Davis notes that there was an initial misassumption, and no one went back to check it. The initial mistake, Davis says, was made by Dr. Jaggers.

"I would say that it's routine for those of us who do this on a regular basis to ask what the blood type is," says Davis.

Nonetheless, he acknowledges that it was a failure of the system as well as the individual.

What may be most disturbing is that UNOS, the national organization that oversees Carolina Donor Services and the New England Organ Bank, already had firm policies in place that should have prevented what happened to Jesica Santillan. Their policy requires that the blood types of donors and recipients be matched before releasing any organs.

Lloyd Jordan, who runs Carolina Donor Services, admits that the company did not ensure that there was a match: "We could have requested her blood type, and I wish we had, but we did not do that."

In the days following her operation, Jesica Santillan's condition rapidly deteriorated, and doctors said her only hope for survival would be a second transplant. All the while, Duke had said nothing publicly about the mistake, and by the time Jesica received a second transplant nearly two weeks later, she was near death.

Her family and her chief advocate, Mark Mahoney, blamed Duke, saying if the hospital had gone public immediately, another set of organs would have been found sooner.

"They let my baby lay on that bed in there for another 11 days before they managed to do something about it, before they decided to 'fess up to what they'd done," says Mahoney at a press conference.

"And in the meantime, all her organs are ruined, and she's probably going to have brain damage, and, you know, guess whose fault that gets to be?"

Jesica Santillan had in fact suffered severe and irreversible brain damage. Tests showed she was brain dead. Doctors told the family they were going to stop the medicines and the machines that were helping Jesica to breathe.

Her mother accused Duke Hospital of trying to murder her daughter. Through a translator, she said at a press conference that she believed "they are taking her off of the medicine little by little in order to kill her. They want to rid themselves of this problem."

It was Dr. Eva Grayck, the attending physician in the Pediatric Intensive Care Unit, who turned off the machines.

"This was unquestionably the most difficult situation that I've been in, or painful situation. I wanted so badly to have something else to tell them. But I had to keep telling them, 'you know, she, this isn't a coma, this isn't a vegetative state. She's dead. We're so sorry, but she's dead.""

The funeral was four days later.

This case underscores the growing problem of medical mistakes, a reality that has become all too clear to Duke Hospital and its CEO, Dr. William Fulkerson.

The vast majority of time when medical errors occur, they don't occur because the people are bad," says Dr. Fulkerson. "They occur because organizations haven't developed yet the kind of systems that we need to be able to catch errors and prevent errors. Medicine is a very human endeavor, and humans are fallible."

Since the death of Jesica Santillan, Duke Hospital has put steps into place to prevent such a tragedy from happening again. Everyone directly involved in the organ transplant process is now required to check and double check the blood type of an organ donor and recipient before a transplant ever takes place.

Is there a reason why those processes weren't in place before?
"Unfortunately, I think historically the way a lot of issues have been identified and analyzed and improved has been in a reactive fashion, after something has occurred," says Fulkerson. "And unfortunately, we're reacting, in this case."

Unfortunately, it was too late for Jesica Santillan.

What does Jaggers have to say to her family? "I can understand their sadness and their despair about all this," he says. "And I think that all of us have a really tragic sense of loss about this. But I'm confident that we did everything we possibly could for Jesica. We acknowledged that an error was made. We did everything we could to save her, to get her new organs, to treat her medically. And as tragic as it is, sometimes things don't go the way you want them to."

The hospital has since taken corrective action and is now in full compliance with all regulations.