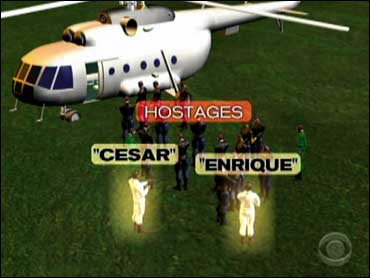 Sources say surveillance flights had narrowed down the possible locations of the hostages. And government spies, masquerading in messages as top FARC commanders, worked to gain the trust of a guerrilla leader named "Cesar" who was guarding FARC's most important political prisoners.

It was an elaborate ruse, which began paying off when two unmarked helicopters touched down yesterday at a remote jungle clearing deep inside Colombia.

There, in a hot, grassy field, "Cesar" and a henchman, "Enrique," herded the 15 handcuffed hostages on to one of the choppers. The guerrilla leaders had been tricked into believing their captives had been summoned by FARC's supreme commander.

"I thought to myself, this is from FARC," she said, thorough a translator.

But, freedom for the three Americans and 12 other political prisoners would come just moments later. Once the helicopter was airborne.

The crew persuaded the two rebels to hand over their weapons, and then overpowered them.

With Cesar and Enrique blindfolded, stripped and held on the floor, the rescue leader gave the hostages stunning news.

As Betancourt explained, they said, "We are the National Army. You are free."

A celebration erupted with the now-freed hostages jumping up and down, prompting Betancourt to remark later "the helicopter nearly fell from the sky."

U.S. officials play down any American role in the rescue, saying while the U.S. shared intelligence, and had Special Forces commandoes on stand-by, deception was the key.