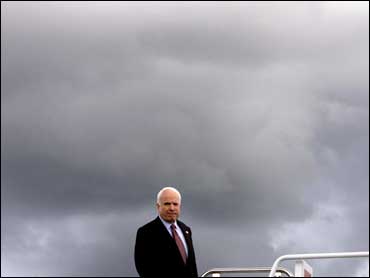 Call it campaign growing pains. Or bad luck. Or a combination of the two.

By any name, Sen. John McCain is hampered by missteps and self-generated controversy in the early days of the general election campaign for the White House.

Take his most recent trip through several states and the Canadian capital, a five-day span during which he courted conservatives and independents alike, raised more than $10 million and began detailing his considerable differences with Sen. Barack Obama on energy policy.

Still, on Tuesday, he criticized his rival for proposing a windfall profits tax on the oil industry. The attack was complicated by McCain's earlier statement that he would consider the same thing.

The following day, he met with a group of Hispanics in Chicago. Aides who had kept word of the event secret were placed on the defensive within hours after one participant criticized some of McCain's comments.

On Thursday, the Arizona senator flew to Iowa, a likely battleground state in the November election, where he expressed sympathy with victims of severe flooding and pledged support for federal recovery aid. The event was overshadowed by President George W. Bush's appearance elsewhere in the same state on the same day.

McCain arrived aboard his chartered campaign jet, yet told reporters at a news conference, "this is not a political campaign trip." The senator added he did not feel it was appropriate to have the government pay "while I am the nominee of my party."

The centerpiece of the six-hour visit was a speech to the Economic Club of Canada that amounted to a cross-border political attack. McCain criticized Obama, without mentioning him by name, for his opposition to the North American Free Trade Agreement.

"Demanding unilateral changes and threatening to abrogate an agreement that has increased trade and prosperity is nothing more than retreating behind protectionist walls," he said.

McCain's schedule also included mention of an unspecified "finance event." While that is customarily campaign jargon for a fundraiser, foreigners may not donate to U.S. candidates, and one aide was quoted in advance as saying that money from $100-per-person event would simply defray the cost of the earlier luncheon.

The non-fundraiser, which may or may not have cost $100 to attend, was held on the top floor of a building with a commanding view of the city skyline. McCain said he knew some of those in attendance had homes in Arizona in the cold weather, and at one point, referred to his campaign themes of "reform, peace and prosperity."

Even some Republicans have cringed in recent weeks at the campaign's efforts to ramp up for the fall campaign, although they will speak only privately.

One top aide, Mark Salter, said if McCain had not gone to Iowa, he would have looked indifferent to "a great natural calamity and the suffering it has caused." The senator has frequently criticized President Bush for his administration's response to Hurricane Katrina.

Salter also said McCain had told the Hispanic audience nothing about immigration that he hasn't told dozens of town hall audiences. He blamed the dustup on a member of the Minuteman organization that opposes giving illegal immigrants any path to legal status.

Salter noted that the speech in Canada contained no overt mention of Obama.

McCain himself told reporters late in the week he remains opposed to the windfall profits tax.

Not that Obama and the Democrats weren't trying to stir controversy at every step.

By the time the sun fell on the day of the Iowa trip, an aide to Gov. Chet Culver said the Democrat had privately relayed a request to McCain to cancel his plans to avoid diverting law enforcement personnel from recovery efforts. Salter said the visit had been cleared in advance by local officials.

And McCain was still on Canadian soil when the Democratic National Committee announced it was filing a Freedom of Information Act request for State Department records detailing the involvement of Ambassador David Wilkins during the trip.

That sort of guerrilla tactic is routine in any presidential campaign. Republicans spent much of the week, for example, drawing attention to Obama's announcement that he would reject public campaign funding for the general election, a major reversal.

And in truth, no candidate can expect to make it through a grueling presidential campaign without suffering one or two self-inflicted wounds - the most grievous of which are far worse than anything that has happened to McCain.

Republican President Gerald Ford's declaration in 1976, at the height of the Cold War, that there was "no Soviet domination of Eastern Europe" was a memorable one.

Or more recently Democratic Sen. John Kerry's decision to go windsurfing in 2004, an event that Republicans turned into a metaphor for a politician who shifts with the wind.

Obama himself spent days in the Democratic primary race trying to explain away remarks he made at a closed-door fundraiser that small-town Americans who were bitter over their economic plight turned to religion.

Republicans took notice of that one, and Obama can expect to hear more about that moment in the fall.

Arguably, McCain has yet to make that kind of gaffe despite enduring a candidacy of remarkable adversity in which he went from front-runner to the campaign cellar and back again.

And for all the talk his critics like to stir about his temper, he never betrayed a hint of displeasure as he made his campaign rounds during the week.

Not even when one man at a Minnesota fundraiser upbraided him for opposing oil drilling in the Arctic National Wildlife Refuge.

"Thank you for that question," McCain replied.