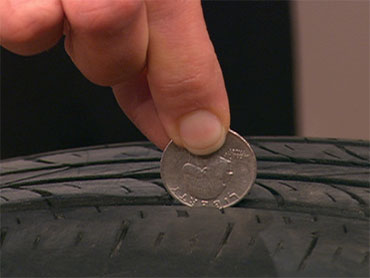 With many more people hitting the road to shop and visit family and friends -- a Rubber Manufacturers Association (RMA) survey shows that very few drivers are checking the safety of their tires. According to the RMA, as many as 28 million vehicles on the road right now have at least one bald tire.

And, as "Early Show" consumer correspondent Susan Koeppen pointed out, all it takes is some bad weather to make a car trip turn dangerous -- especially if your tires are worn out.

How important is it to pay attention to your tires?

Jennifer Stockburger, of Consumer Reports, told CBS News, "It can be a fine line between one day, having a near miss and the next day being in real trouble."

To demonstrate tire safety, Koeppen asked Consumer Reports tire expert Stockburger to show the difference between driving on new tires versus tires that are worn out.

Koeppen and Stockburger took a car with all new tires through 10 millimeters of water -- going 45 miles per hour.

As Stockburger pointed out, the car "tracks directly through the curve."

However, when they changed tires -- putting on four tires that were shaved down to simulate worn out tires - the car hydroplaned at the same speed.

Stockburger said, "If this were a highway scenario, we would have drifted into another lane."

But what if you can't afford four new tires?

Stockburger says you can get away with just replacing two tires -- if you put them in the right spot.

New tires, she said, should always go on the rear of the car.

A professional driver demonstrated that at 45 miles per hour, with bad tires on in the rear, a car can fishtail across the highway.

Stockburger explained, "What happens is his rear lets go because you don't have as much grip as much thread depth."

However, with the good tires on the back and the worn tires in the front, the driver negotiated the course without incident.

The average all-season tires should last 40,000 miles, but waiting too long to replace them could be a serious safety hazard.

Stockburger said, "The price you pay for a set of tires is a small amount for what you would pay for an insurance deductible, and worse yet, for injuries."

And according to a tire study 64 percent of people said they had no idea had to check their tire tread.

Koeppen demonstrated that all you need is a quarter and a penny to check your tires' tread.

Take a quarter and turn it upside down, so the head of Washington is in the tire tread, facing the tire. Koeppen explained if you can see the top of Washington's head, it means it's time to start thinking about shopping for a new tire.

And if you do the same thing with the penny, and you can see the top of Lincoln's head, it means your tires are worn and you need to replace them.

Koeppen said, "A lot of people can't tell just by looking at (their tires). Give yourself time to shop around, so you can then take your time, look around, find the price you want, so you're not at the mercy of the dealer when you walk in and say, 'I need tires today.'"