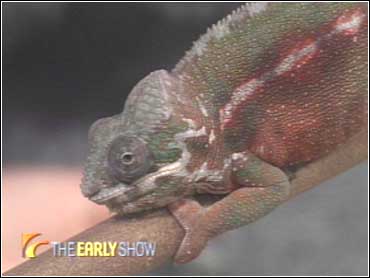 Joan Embery of the San Diego Zoo just returned from a trip to Madagascar, an island off the east coast of Africa which is facing serious survival challenges, including deforestation, poverty and depletion of the island's plant and animal species.

The San Diego Zoo is helping with these problems by educating the local population about how they can use the natural resources to provide a living for themselves.

When she visited The Early Show earlier this year, Embery brought with her several animals that live on Madagascar, including a black and white ruffled lemur, a Madagascan boa constrictor, a panther chameleon, an armored chameleon, and a tenrec, which is similar to a hedgehog.

Madagascar is home to 50 species of primates (all lemurs) that are found nowhere else in the world.

Showing the black and white lemur, Embery called the animal "an example of what we stand to lose when you cut large sections of forest. About 90 percent of the forest has been cleared. The population is growing. It will double in the next 20 years. The real key to protecting lemurs is protecting the forest" because they live in the trees.

Madagascar also is hone to 300 reptiles found nowhere else in the world, including those chameleons. Unfortunately, because they are popular in the pet trade, chameleons are used as profitable exports, a practice that hurts the species.

That's why the ranching of butterflies is such an important skill to teach on Madagascar, a project that has been undertaken by the San Diego Zoo and the Wildlife Conservation Society. Such education involves showing the people how to cultivate the plants where butterflies will breed and how to collect the eggs. The butterflies are then sold to zoos throughout the world.

Shortly before The Early Show segment, Co-Anchor Jane Clayson was nipped by the tenrec. But she said Embery advised her to put something on it and it would be fine. "It didn't even know what it was biting. It may have smelled food," said Embery, in defense of the critter.

Anchor Bryant Gumbel, who has hosted his share of animal segments, commiserated with Clayson, saying, "Every time you work with animals, it's srange. You never really quite know what you're going to get."

He said the only animal that ever "freaked him out" on the air was an eagle, more than three feet high and with a wing span of seven feet.

He recalled, "Yeah, they could have pulled it off (you), but if the thing decided to strike, it could have done a number on you before they realized it, and the eagle sits there looking at you, and it freaks you out."

As for Embery, she said she has been "spit on, kicked, horned. You name it. It kind of comes with the territory." Yet, she added, she has never been hospitalized.

"I was live on camera with Suzanne Somers and Stefanie Powers and a cheetah, and somebody touched the cheetah, and it jumped, as a reaction, and caught me in the lip and opened my lip up," she said.

Both Somers and Powers were good sports, Embery reported, and Powers even helped bandage her lip so the show could go on.