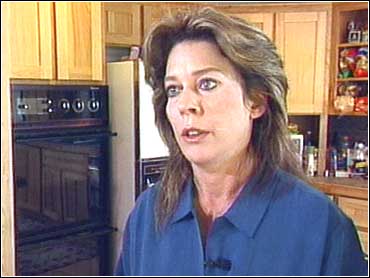 Melinda Ballard and Ron Allison thought theirs was a dream house: a 22-room mansion on 72 acres outside of Austin, Texas.

Ballard, a former New York City public relations executive, thought it offered the perfect way to escape from the big city. "It was my baby," she said. "And it was truly a dream house for me."

It's not a dream anymore. Ballard and Allison abandoned their home; they were forced to move out when their house was invaded by a mold that they say made everyone in their family sick. Erin Moriarty reports.

The couple's son Reese was the first to become ill at age 4. "(He was) coughing up blood," Ballard said. "His equilibrium was completely shot; very bad stomach problems; diarrhea; vomiting - it just spanned the whole globe in terms of symptoms."

Soon Ballard became sick; she says she had trouble staying on her feet. Then Allison, an investment banker, began having trouble breathing. He started coughing up blood, Ballard said.

Experts say the family was being poisoned by a black toxic mold, called Stachybotrys. The mold, which has been found in all 50 states, in homes, businesses and schools, had invaded their house. Some strains of Stachybotrys cause allergies, asthma and skin rashes. Others produce mycotoxins, released into the air. These toxins can seriously damage the lungs and central nervous system.

In April 1999, Dr. David Straus, one of the nation's leading mold experts, ordered the Ballards to evacuate their house. They had to leave at a moment's notice. They left dishes in the dishwasher and food in the refrigerator.

Dr. Straus believed they became sick from breathing in mycotoxins. The mold most commonly grows as a result of water damage, according to Dr. Straus.

This mold began with a leak in the downstairs bathroom, Ballard said.

"It needs water and it needs some type of organic food source," said Dr. Straus, who is at Texas Tech University. "They like cellulose," he added. "Most of the material we use to build houses - like Sheetrock, ceiling tile, wood - fungi can grow on."

The mold infiltrated under the flooring, 2,500 square feet of a wooden floor, accordng to Ballard.

And the mold contaminated all of the family's possessions, including photographs, Dr. Straus said. It got into the air-conditioning unit and spread toxins throughout the house. Removing every trace of the mycotoxins may be impossible, said experts hired by the Ballards.

"This is like what happens in a huge flood; you lose everything," Ballard said.

The toxins affected her husband, she added. He became very forgetful: When he'd go to the grocery store, he'd leave the groceries there, she said.

His co-worker Harold Babbitt noticed the change. "I would walk into his office, and he would just be staring, like someone who had a stroke," Babbitt said. "There were deals that should have been completed that weren't completed."

Since Ballard left the house, her symptoms disappeared.

But Reese developed asthma and had trouble in school. Allison went to New York with Reese to see a doctor specializing in treatment of mold exposure illnesses: Dr. Eckhardt Johanning, of Albany, who has studied more than 600 patients exposed to toxic mold.

Dr. Johanning found that both Reese and his father had low levels of antibodies, which suggested exposure to a toxin.

Ballard said that Dr. Johanning said Reese should never again be exposed to the mold.

"I'm not saying this is necessarily a permanent condition," Dr. Johanning said. "The brain can repair itself a lot. But it may take some time to do. Stachybotrys produces very potent chemicals that can cause brain fogginess, tremors, problems with the memory."

Allison, Ballard and their son are not the only family to have trouble with the mold. In Southern California, Julie and Richard Licon found Stachybotrys in the walls and floors of their condominium.

"All the wood was pretty much black from the mold," said Richard Licon.


The couple's homeowners association agreed to move the Licons and their six children to a hotel while the house was cleaned of mold.

Seven months later, the Licons moved back. But they became convinced the mold was still there. During the seven months in the hotel, the children were not sick, Julie Licon said. When they moved back into their condominium, however, the kids got sick, she noted.

Their son Jordan, then 2, had seizures form mold exposure. These seizures resumed when they moved back, the Licons said. Their other children also experienced a variety of symptoms, from nosebleeds to headaches and dizziness.

They retested their house and found massive amounts of Stachybotrys in the air. A spore had grown inside the air-conditioning unit.

So the Licons moved out again. "The only thing we can take, literally, is the clothes on our back," Richard Licon said.

In some cases, Stachybotrys may even kill.

Dr. Dorr Dearborn, of Rainbow Children's Hospital in Cleveland, who has studied pulmonary hemorrhaging in infants, said the mold is not only dangerous but deadly: "Of the 29 cases (of pulmonary hemorrhaging in infants) that we've studied in depth, we've had five deaths. And all five of those have come from homes that were contaminated with Stachybotrys."

In California, the Licons are in litigation with their homeowners association for not completely removing mold the first time around. Since the 48 Hours broadcast in March, the Licon family has still not been able to return to its former home. But the children's symptoms have gone away. The fate of the home remains uncertain as does the long term health of the children.