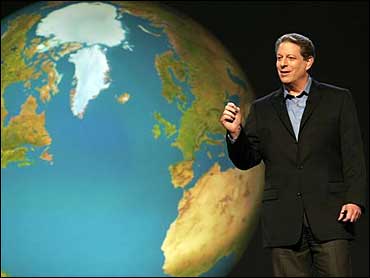 This column was written by Irwin M. Stelzer.

As they struggle to cope with voters' new concern about global warming, the world's politicians seem to be standing in front of Snow White's mirror asking, "Mirror, mirror on the wall, who in the land is the greenest of all?" while desperately chanting the Everly Brothers hit, "Let it be me." Australia's Prime Minister John Howard opened the bidding by banning the sale of incandescent light bulbs, starting in 2010; Britain's Tony Blair and Germany's Angela Merkel are competing for the anti-global warming leadership of Europe, while the British prime minister-to-be entertains Al Gore for what can only be an ample lunch; Tory leader David Cameron is erecting windmills on his house and targeting air travel, with people who fly most often (read: wealth-generating businessmen) to be taxed at the highest rate; California Governor Arnold Schwarzenegger has converted one of his Hummers to hydrogen and another to biofuel, and says the environmental movement is taking off just like the body-building movement once did; and George W. Bush is lavishing billions of taxpayers' money on America's already-cosseted farmers to get them to grow more corn.

All of these plans have two features in common: rationing and new costs. Both Tory and Labour green campaigners favor issuing each of us a certain number of carbon credits, modeled after the ration books of World War II. This rationing of carbon emissions means rationing energy, at least until new technologies emerge, and will involve enforced used of fluorescent light bulbs, or inconvenient switches on television sets, or so low an individual allocation of carbon credits as to curtail travel. Such rationing apparently appeals to left-leaning types. "The current climate crisis gives the Labour Party — never comfortable with the politics of post-war affluence — the opportunity to return to the politics of austerity," writes Professor Mark Roodhouse of the University of York in support of applying to climate change "the Blitz spirit . . . this time to avert catastrophic climate change rather than Nazi invasion." Show the Left a crisis, and they will show you how to surrender more control of your life to the government.

The second feature of all proposals is that they cost money — to be paid by consumers, taxpayers, and businesses. Some green politicians want to tax energy use, or at least those uses they have decided are not as important as other uses (airplanes seems to be the first thing that comes to politicians' mind as they jet around the world to conferences aimed at saving the planet). Others want to cap the carbon emissions of various industries, imposing costs that will certainly be reflected either in higher prices or, if the rest of the world doesn't go along, in jobs lost to international competitors.

Consider the simple matter of incandescent light bulbs, which the European Union wants switched off by 2009, and Australia a year later. (I'll wager this policy comes to our Congress ere long.) The European Lamp Companies Federation is ecstatic. Its president hailed the move, "These [energy-efficient] bulbs have been on the market for 15 years. Price has been a factor. If the E.U. sets minimum energy-efficiency standards, people will have to buy them." No surprise that the industry is delighted to have government force people to buy a product consumers don't want, at prices they consider too high.

All of these costs might be worth bearing if the threat is as immediate and overwhelming as our very own Al Gore and Britain's Sir Nicholas Stern believe. Fortunately, it is neither — Gore is guessing that sea levels will rise 20 feet, and soon, while scientists are guessing closer to 20 inches, and later. The flaws in the Stern report have been pointed out by serious academics at MIT and elsewhere when Stern recently visited the United States. Stern's critics, it should be noted, include many scholars and experts who do not oppose emissions-reducing policies as insurance should the forecasts of warming prove correct, and the new technologies now on the drawing boards prove unworkable or uneconomic.

So sensible policymakers will have to ignore the most dire forecasters. And the noisiest. Hollywood stars such as Pierce Brosnan and Martin Sheen, leaders in the fight against global warming, are also leading the campaign against the construction of an offshore terminal that would permit the importation of clean, liquefied natural gas from Australia into California. That $800 million project would supply 15 percent of California's massive natural gas requirements.

Powerful American promoters of the virtues of ethanol are fighting to retain the 54-cent-per-gallon tariff that keeps cheaper ethanol from entering U.S. markets. Warned by corn-state congressmen that their constituents were demanding the right to develop a high-cost domestic industry, President Bush was unable to promise the Brazilians that he would roll back that tariff.

Finally, it does make sense to consider the unintended consequences of legislation. Our policy-makers' infatuation with corn as a replacement for crude oil has driven corn prices so high that poor Mexicans can't afford tortillas. It has created such inflated incentives to plant more corn that forests are being chopped down to increase corn plantings and other acreage is being shifted from barley to biofuels, driving up the cost of beer. The new light bulbs will make reading more difficult and drive up demand for spectacles — the cosmetics industry is said to be reformulating foundation makeup so that feminine beauty will shine through the strange hue emitted by the new bulbs. There are more such consequences, but you get the idea: think hard before jumping on the green bandwagon. There is no free ride.