Not everyone aboard Barack Obama's inaugural train was an elected official or political insider. Among the passengers were several ordinary Americans with extraordinary stories to tell. CBS Evening News correspondent Priya David spoke with one of them. 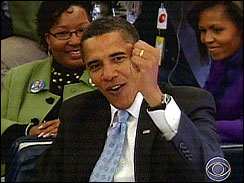 (CBS)
Dover schoolteacher Quincy Lucas (seen here in the green behind Barack Obama on Saturday's historic train ride) was one of sixteen so-called "everyday Americans" who rode along with President-elect Barack Obama Saturday.

"I am a normal person. But today I feel pretty special,'' said Quincy.

But Quincy Lucas' journey truly began six years ago. The mother and fourth-grade teacher was living a quiet life in Dover, Delaware, when her younger sister Whitney was murdered by an ex-boyfriend.

"The timing of me being on the train falls on the sixth anniversary of my sister's murder,'' she said.

Lucas started a non-profit in her sister's name, and joined forces with her state's senior senator to support tougher laws to protect women.

Video:
Special Rider On Obama Train
"I never thought I'd see a day where I could be a voice for Whitney and so many people."

When Senator Joe Biden officially took the vice presidential nomination this summer, it was Quincy Lucas who threw his hat into the ring.

"So it is in memory of my sister and in the name of women all across this country, that I'm proud to place into nomination the name of Joe Biden to be our next vice president," she said back then.

Now, Lucas is bringing that voice to Washington, at least for a few days.

Before the trip, Priya David asked Lucas's students what they thought of their teacher going to D.C. on the president-elect's train.

"I think that it's very awesome of her to hang out with Barack Obama," said Max, 9.

"I hope the message that they are sending is not only come on board the train. But join us as we move in this direction. Join us on this journey," said Lucas.

Photos: Inaugural Train Ride
Barack Obama spoke to crowds in Philadelphia, Wilmington and Baltimore in route to Washington D.C. Saturday. The trip retraced the path Abraham Lincoln took to his inauguration. (Photo: AP)
"What so we think the inauguration is about?" Lucas asked her students.

"It's the time to go to work and save our country and stuff,'' said another student.

Lucas says in the future, she'd like to work for the Obama administration. But for now, she has plenty to accomplish in home room.