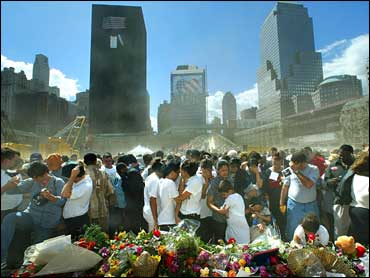 New York's day of official mourning for the 2,801 people killed at the World Trade Center began with bagpipers marching to Ground Zero and ended with the lighting of an eternal flame and vigils and memorial concerts in each of the city's five boroughs.

In Battery Park, just steps away from where the twin towers once stood, Mayor Michael Bloomberg and dignitaries including Secretary of State Colin Powell and representatives of 90 countries - many of them heads of state - gathered for the lighting of the eternal flame.

It now burns at the spot now called The Sphere, a piece of sculpture which used to stand at the twin towers and strangely survived the destruction there.

During the ceremony, Bloomberg read excerpts from "The Four Freedoms," inspiring passages from President Franklin D. Roosevelt's 1941 message to Congress.

"This nation has placed its destiny in the hands and heads and hearts of its millions of free men and women, and its faith in freedom under the guidance of God," read Bloomberg. "Freedom means the supremacy of human rights everywhere. Our strength is in our unity of purpose. To that high concept, there can be no end, save victory."

As the dignitaries wound up that solemn ceremony, candlelight vigils and memorial concerts were held all over the city. In Central Park, Billy Joel delivered a haunting rendition of his "New York State of Mind" and Meryl Streep quoted Abraham Lincoln on the eternal struggle in the world between the principles of right and wrong.

But it is the ceremonies at Ground Zero, held Sept. 11 at the same time of day as the actual terror attacks, that will haunt most New Yorkers, both those who were there - family members of the dead - and those who only stood nearby or watched or listened to one of the many broadcasts of the memorial.

The families arrived at the eerily vacant 16-acre World Trade Center site early Wednesday, some dressed in formal funeral attire, and many others wearing t-shirts custom printed with the name of their lost loved one.

Many wore firefighter and police shirts and hats. Most had flowers and photos that by the end of the day, rested on the earth at Ground Zero, as makeshift memorials.

The unprecedented scene of the enormous line of the bereaved, snaking around the block further than anyone could see, filing into Ground Zero for the ceremony was matched only by the moment each had come to witness: the reading aloud of each and every one of the names of the victims of the World Trade Center attack.

Hundreds of family made their way down a long ramp, seven stories down to the floor of the 16-acre pit, to an honor guard's circle of honor. Some left mementos, others gathered clumps of the earth they call sacred.

"Again today we are a nation that mourns. Again today we take into our hearts and minds those who perished on this site one year ago," said Mayor Michael Bloomberg as he called for a moment of silence at 8:46 a.m. EDT.

So lengthy was the list of the 2,801 of the missing and the dead that a recitation that was to have ended just before 10:30 a.m., when the second trade center tower collapsed, ran 50 minutes long.

Some of the thousands gathered raised American flags; others held up pictures of lost loved ones. Most bowed their heads in prayer. Seven-year-old Skyler Mercado of the Bronx clutched the helmet of his firefighter father, Steve Mercado, who died there.

As Yo-Yo Ma played the "Sarabande" of Bach's C minor cello suite, former Mayor Rudolph Giuliani began the solemn reading of the names of World Trade Center attack victims. The recitation ended with the sound of "Taps" and the ringing of bells across New York City.

The first name read was that of Gordon Aamoth Jr., 32, who worked for investment firm Sandler O'Neill & Partners on the south tower's 104th floor. The roll ended with Igor Zukelman, 29, who worked at Fiduciary Trust Company International in the north tower.

Stiff winds buffeted mourners in the crater with eye-stinging dust during the ceremony. On the street at the edge of precipice, passersby flinched as pieces of the facade of the damaged Deutsche Bank building loudly crashed into construction netting.

The 197 name readers included survivors and relatives of victims from hard-hit companies like Cantor Fitzgerald and Aon, as well as Secretary of State Colin Powell and Sen. Hillary Rodham Clinton.

The recitation of the names paused for a text reading by 17-year-old Marianne Keane at 9:03 a.m., when the second plane struck. Keane's father, Franco Lalama, was an engineer for New York's Port Authority who died at the trade center.

"I would give anything to go back to the morning of Sept. 11 and tell him how much I appreciated everything he's done for me," she said. "But I think he knows that now. In my eyes he died a hero. And how much more could you ask for?"

The reading paused again at 9:59 a.m., when the first tower fell.

Then 11-year-old Brittany Clark read a poem for her father, Benjamin Keefe Clark, a chef who was last seen helping a woman in a wheelchair on the 88th floor of one of the towers.

"I am with you still," Brittany said. "I do not sleep. I am a thousand winds that blow. I am the diamond glint on the snow."

The ceremony paused again for silence just before 10:30 a.m., when the north tower fell. The sounds of tolling bells and "Amazing Grace" filled the air.

A focal point of Wednesday's ceremony was a circle marked off at the bottom of ground zero, where relatives deposited personal items and flowers as the names of their loved ones were read. Some of the items will be included in a permanent memorial.

Dignitaries relied on history to express the city's grief - and its resolve. Gov. George Pataki read from the Gettysburg Address, and New Jersey Gov. James McGreevey recited from the Declaration of Independence.

Wednesday's session of the New York Stock Exchange, located a few blocks from ground zero, was delayed for 2½ hours because of the ground zero ceremony. Trading was suspended for four sessions following the Sept. 11 attack.

People who work in the nation's financial heart said the day reminded them of just how much has changed in the last year.

"This is in the back of my head every day and it never goes away," said Richie Weppler, who works on the floor of the American Stock Exchange. He wiped tears from his cheeks as he was coming out of Trinity Church, just up the street from the New York Stock Exchange. He said he lost five co-workers in the attack.

"Still today, it's like 'Why?' No one can ever answer that question," said Andrea Moxey, who left her job at a firm just down from the exchange because she could not bear to spend working days in lower Manhattan following Sept. 11.

The anniversary ceremony got an early start in New York City.

Overnight, bagpipers - representing the NYPD, the Port Authority police, the Fire department, the Corrections department, and the Sanitation department -led solemn pilgrimages from each of New York's five boroughs, some beginning from as far as 19 miles away.

Hundreds of everyday New Yorkers, many wearing T-shirts that read "I Love New York," joined the procession as it crossed the Brooklyn Bridge into Manhattan.

Extraordinary security was in place at bridges, tunnels, landmarks and anniversary ceremonies, although officials cautioned there was no specific threat against any target in the city or state.