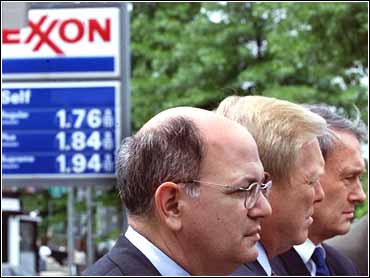 Eager to draw a contrast with President Bush, House Democrats unveiled an energy blueprint Tuesday that calls for the government to hold down price increases for electric power while sparing environmentally sensitive areas from oil and gas exploration.

The plan also includes proposed tax credits of up to $4,000 for the purchase of energy-efficient homes and cars and additional tax incentives for businesses to invest in energy-efficient technologies or vehicles.

"The president has a highly flawed agenda focused more on the needs of the energy lobby than average consumers and small businesses," Gephardt said.

"President Bush's pronouncement that he will not use the reserve to combat manipulation of energy markets amounts to unilateral disarmament in talks with oil producing countries," the Democrats said in a summary of their plan.

Click here
for an inside look at the 107th U.S. Congress
The Democrats drew up their proposal as a contrast to the policy which the president is expected to release on Thursday. Political leaders in both parties say rising energy costs are becoming a more significant concern of average Americans, in part because of higher fuel prices and in part because of the potential for a return to rolling blackouts in California.

Democrats intend to propose a blend of government intervention, tax breaks and additional federal funding to hold down prices and encourage energy efficiency in the short-term, and to increase domestic supplies in the future.

Included is a call for the Federal Energy Regulatory Commission to stop producers from charging "unjust and unreasonable wholesale prices" in the West. FERC would be told to return to "cost-of-service-based rates" until March 2003, a system that allows government to limit wholesalers' profits.

Democrats also want FERC to order refunds of any unjust charges that have occurred already and are pressing the Justice Department to "assure that illegal price-fixing does not occur."

In addition, they say, "Democrats reject opening the Arctic National Wildlife Refuge for oil and gas exploration until all other proven reserves and other federal lands already open to development have been exhausted."

On gasoline prices, Democrats want Mr. Bush to signal illingness to tap the nation's Strategic Petroleum Reserve in the event of sharp price hikes. They accuse the president of "unilateral disarmament" by saying he won't do so.

In addition, they will press him to call on OPEC and other oil-producing nations to increase production as a means of holding down prices.

And while the plan suggests more incentives for production, it departs from Mr. Bush's emerging proposal on several key points.

It makes no recommendation for additional nuclear power plants, which the administration is expected to stress later this week. Instead, Democrats intend to say that they "support continued research in advanced technologies for nuclear power as well as continued efforts to find safe and environmentally sound methods to reduce nuclear waste and provide for its safe disposal."

Vice President Dick Cheney, in an interview with The Associated Press on Monday, spoke dismissively of some of the Democratic proposals, even before they became public.

Cheney, the administration's lead spokesman on energy, rejected calls for price limits and a federal investigation into allegations of price gouging by gasoline companies. "That's exactly the kind of misguided — I'm trying to think how to state this gracefully — politically motivated policies we've had in the past," he said.

Mr. Bush and Cheney both have roots in the energy business in Texas, a fact that Democrats are likely to underscore as the debate unfolds in the weeks ahead.