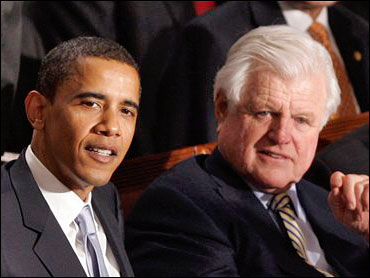 This column was written by Jonathan Cohn

How will Ted Kennedy's endorsement affect the presidential race? The debate is already well underway. Skeptics note that endorsements don't have the same weight they did a few decades ago, when more voters took their cues from party leaders. Al Gore's endorsement of Howard Dean four years ago certainly didn't deliver the nomination.

But Kennedy's progressive record on economic issues, not to mention his family name, might give him unusual clout with older, working-class white voters - ones who, until now, have strongly preferred Hillary Clinton. Kennedy is also said to be popular with Latinos, thanks in part to his history of championing liberal immigration reforms and to Robert Kennedy's early support of Cesar Chavez.

This is where the timing of Kennedy's announcement - and peculiar dynamics of this race - could prove critical. Latinos, who have strongly favored Clinton so far, are well-represented in the big states voting on February 5. And while Kennedy's endorsement alone surely isn't enough to swing a whole state like New Jersey or California, it might be enough to shift enough votes to change delegate counts - which is what really matters at this point.

Remember, Democratic primaries aren't winner-take-all. Even if Clinton wins more votes in the biggest coastal states, a strong second-place showing by Barack Obama in those places - combined with winnings in Illinois and other interior states - could give him the majority of the day's delegates. (Or at least keep the count pretty close.)

But while I can't say with confidence whether people will pay attention to Kennedy's endorsement, I feel certain that they should pay attention - because Kennedy's embrace speaks directly to the misgivings (expressed, on more than one occasion, by me) that Obama was insufficiently committed to a progressive policy agenda and that he lacked the savvy to enact an ambitious, necessarily controversial agenda.

Consider: No member of Congress has a longer, truer record of championing liberal causes than Kennedy. He was fighting for universal coverage back when Hillary Clinton was still in law school. And when the times have called for confrontation, Kennedy has not flinched. Look back at 1995 and 1996, when programs like Medicare were under seige from a new and aggressive Republican majority, and you'll find Kennedy leading the counter-attack. In August 1996, after the Democrats had finally beaten back the Gingrich revolutionaries, then-Minority Leader Tom Daschle (now an Obama booster, by the way) said of Kennedy "I don't know anybody who contributed more."

Still, Kennedy also has a strong pragmatic streak. It's hard to think of anybody in Congress who has produced as much important legislation, even in times when Democrats were out of power. (Henry Waxman is the only name that comes quickly to mind.) To accomplish this, Kennedy has sometimes embraced such unlikely allies as George W. Bush and Mitt Romney in order to push for such imperfect laws as No Child Left Behind and the recent Massachusetts health care reforms. But if those efforts have annoyed liberal allies now and then, they have generally served the liberal cause well. Just ask anybody covered under the State Children's Health Insurance Program (S-CHIP), a bipartisan program from the late 1990s for which Kennedy was heavily responsible. (In fairness, both Clintons had a little something to do with that, too.)

To be sure, it's reasonable and necessary to ask whether Obama can strike such a similarly deft balance between confrontation and compromise - a question Paul Krugman poses in an important column today. It's also fair to treat skeptically the true meaning of any endorsement, given how frequently they reflect petty politics or personal strategic considerations rather than considered judgments about qualifications for office.

But it's not clear how Kennedy stands to gain politically by antagonizing Clinton, who remains the presumptive front-runner. Nor is there evidence of personal animus between the two. On the contrary, every account I've ever heard suggests Kennedy has a high regard for Clinton, going back to her days as First Lady.

So my hunch - and, to be clear, it's just a hunch - is that this is mostly the real thing. It may reflect Kennedy's anger over the recent capmaign tactics, about which Kennedy apparently complained directly to the Clintons. It may reflect Kennedy's sense that Obama has tapped into the same idealism that JFK once did - a feeling the former president's daughter, Caroline Kennedy, wrote about in her own Obama endorsement on the Times op-ed page yesterday. But I also think it reflects Kennedy's belief that Obama will ultimately serve the liberal cause better than Clinton could. And given that Kennedy has seen both presidential contenders up close, as Brian Beutler notes, that judgment has meaning.

Naturally, Kennedy's endorsement carries some risk, too. What will all those Republicans think about supporting Obama - the Obamicans, as he has started calling them - say when they see Kennedy embracing him?

Then again, I bet that's a problem Clinton wishes she had today.
By Jonathan Cohn
If you like this article, go to www.tnr.com, which breaks down today's top stories and offers nearly 100 years of news, opinion and analysis