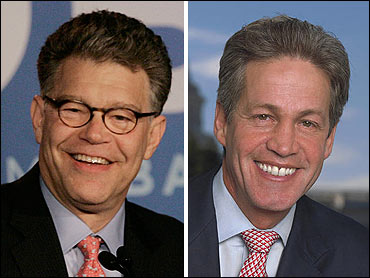 (CBS/AP)
Could an end be in sight for the stalled Minnesota Senate race between incumbent Norm Coleman and his Democratic opponent, former comedian Al Franken?

After more than four months of recounts and deliberations, the Minnesota court hearing the appeal could announce a decision as late as next week CBS News' Political Director Steve Chaggaris reports.

A source close to Franken tells CBS News' Mary Hager that "the court will virtually certainly rule in his favor, and he will likely add significantly to the margin, maybe up to 500 votes or so," at which point Coleman will likely appeal to the Minnesota Supreme Court.

The source says that Minnesota state law allows the Supreme Court to drop all other business to quickly hear and deliberate on Coleman's appeal.

"Give a week to prepare briefs, a day of oral argument, and a few days for a ruling. Then they will probably call for a certification. At that point, perhaps mid-April, he comes to DC," the source says, adding that Senate Minority Leader Mitch McConnell may try to filibuster Franken's potential seating until Coleman's appeals have been exhausted.

Franken has said publically that he does not expect to be seated before Coleman's appeal is heard.

The former comedian has been visiting with Reid and Senate Democrats regularly in Washington, D.C. during recent weeks.

Reid's office tells CBS News, however, that they "need to wait and see what the Minnesota Supreme Court says first" before moving to seat Franken.

The Minnesota canvassing board certified Franken the winner of the race by 225 votes in January, at which point Coleman filed an appeal challenging the results.

Coleman's counsel argued that there were 86 precincts across the state where vote recount irregularities may have rendered the closer-than-close results illegitimate. Three judges rejected Coleman's argument.

But those looking for a speedy decision should be wary. Earlier this month, The Minneapolis Star-Tribune reported that top Senate Republicans were encouraging Coleman to take the case to the U.S. Supreme Court if necessary on the grounds of equal protection.