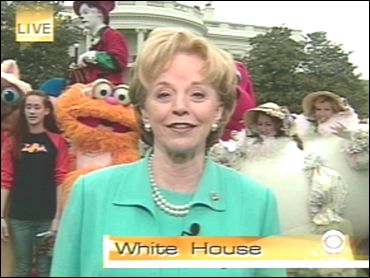 This year, the traditional Easter egg roll at the White House is for military families only, a change intended to reflect the nation's wartime gratitude to servicemen and servicewomen.

"I want to first of all confirm what we all know. How proud this country is of the men and women who are serving in our military," said Lynne Cheney, wife of the vice president and host of this year's holiday event.

In an interview for The Early Show on south lawn of the White House shortly before the 124-year-old tradition was to begin, Mrs. Cheney told co-anchor Harry Smith that 12,000 parents and children of active duty and reserved troops have been invited.

"I also want to say to the kids how proud I know their parents are of them," Mrs. Cheney said. "I think that's an important message always to carry the little kids, to talk about the great pride that grown-ups, and in particular their parents, take in them."

In addition to the headline event, Monday's outdoor activities include music, reading corners, egg coloring and drawing for the children and appearances by cartoon characters and special guests.

"We've got some important people here reading to these kids, Mel Martinez is coming, Christie Todd Whitman, other cabinet members, to participate in little reading nooks. I'm going to be reading to the children today," Mrs. Cheney said. She will read from a children's book she wrote called "A Patriotic Primer."

"I think it's a perfect time to be talking about the foundations on which this country was built, and about some of the great characters in our history like George Washington, Thomas Jefferson, Abraham Lincoln and Martin Luther King Jr.," she said. "So we'll be talking about that over in my reading nook," she said. The book was released last year and now she's working on another called "A is for Abigail Adams."

Mrs. Cheney also revealed a secret to Smith, who loves secrets. "The Easter bunny is actually named Lynn. And no it's not me. It is the wife of the vice chairman of the joint chiefs of staff, Lynn Pace. So I have revealed a great secret here on national television," she said.

The Easter egg event began as a hunt but was change dto roll by First Lady Pat Nixon. "They took White House spoons, and the kids roll the eggs across the lawn. So it's actually an Easter egg roll," Mrs. Cheney explained.

Last year, President George W. Bush and first lady Laura Bush welcomed thousands of children and their parents to the Easter egg roll on the South Lawn. It was the first time the general public had been invited inside the gates since just after the terrorist attacks in September 2001.