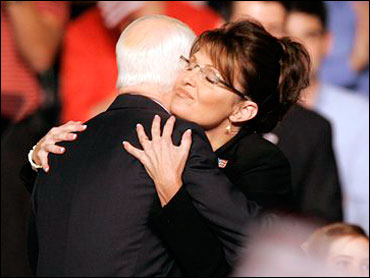 This column was written by Peter Scoblic.

It may be John McCain's birthday, but it seems like he's the one giving out gifts today. The selection of Palin doesn't simply, as others have pointed out, undermine the notion that Obama is too inexperienced to be president; it gives Obama the chance to actually take the edge on national security while making John McCain's age a central issue of the campaign.

Whatever the political calculations involved in picking a veep, the most important qualification for the vice presidency is the ability to assume the presidency in a crisis. Given that of the last 12 presidents, three have either died or resigned, this is hardly a hypothetical consideration--in fact, given that McCain is 72, it is a very real consideration. Harry Truman, Lyndon Johnson, and Gerald Ford all faced multiple foreign policy crises immediately upon assuming office, whether it was the onset of the Cold War, the North's invasion of South Korea, the Vietnam War, or the withering of détente and the resulting increase in nuclear tension with the Soviet Union. The next president will have to finish the denuclearization of North Korea; prevent the nuclearization of Iran; organize a departure from Iraq that maintains some level of stability; defeat a resurgent Taliban in Afghanistan; establish, nurture, and make the most of a relationship with Pakistan's new leaders; and confront a revanchist Russia while preserving and enhancing its cooperation on nonproliferation and climate change--to say nothing of working with India, China, or our allies.

Could Sarah Palin conceivably manage this task? Her tenure as a small-town mayor and Alaska governor has given her no foreign policy experience whatsoever. True, Obama has little foreign policy experience either, as McCain and others have pointed out again and again. But during his time in national office he has demonstrated a clear commitment to the most pressing issues in American foreign policy. Take nuclear proliferation. Early in his tenure on the Foreign Relations Committee, Obama joined Richard Lugar's efforts to secure weapons of mass destruction in the former Soviet Union. Obama's first trip abroad as senator was to Russia and Ukraine to learn more about those efforts firsthand. In 2007, he cosponsored legislation with Senator Chuck Hagel calling for ratification of the Comprehensive Test Ban Treaty and negotiation of a fissile material cut-off treaty. And he was the first major presidential candidate to embrace the steps laid out in 2007 by Sam Nunn, Bill Perry, George Shultz, and Henry Kissinger through which the United States would fight nuclear terrorism, reinvigorate the nuclear Nonproliferation Treaty, and ultimately eliminate nuclear weapons.

Perhaps more important than the experience they embodied, these efforts demonstrate that Obama has a worldview. Obama recognizes the greatness and uniqueness of the United States, but he does not translate that exceptionalism into dominance or isolationism as conservatives often have. Instead, he sees it as the basis for U.S. leadership. He has laid out that worldview in myriad speeches and articles, and he has surrounded himself with pragmatists who have a record of translating that understanding of America's role into concrete gains for our national security. By contrast, there is no indication that Palin has even shades of a foreign policy worldview; a Nexis search doesn't turn up a single article that she has written on international affairs.

McCain undoubtedly thinks he has his national security bases covered; picking Palin shows that, unlike Obama, he doesn't need an eminence grise like Biden to add heft to his ticket. But surely McCain recognizes that Palin may have to fill his shoes someday. By choosing her anyway, he has demonstrated hubris well beyond anything Obama has displayed on his most arrogant day: a belief that he can master unforeseen circumstances, physical and otherwise, that are well beyond his control. This is insulting and dangerous and suggests that McCain may want to think twice before accusing Obama of putting his personal ambition ahead of the national interest.

No doubt Michelle is right that the Obama-Biden team will have to be careful attacking Palin's frighteningly thin resume and tenuous grasp of foreign policy. But surely a campaign that has been charged with being too naïve to manage rogue state dictators can have a bit of fun with the idea that a one-time Miss Congeniality could effectively face down Vladimir Putin, Mahmoud Ahmadinejad, or Kim Jong Il. Surely, Obama's "eight is enough" quip ought to apply not only to President Bush's economic and foreign policy travesties, but to the elevation of mediocrity that has characterized his appointment of Michael Brown to FEMA and his nomination of Harriet Miers to the Supreme Court. And surely we can agree that if the McCain campaign was desperate to transparently court voters put off by Hillary Clinton's loss, there is no dearth of women with far greater intellectual, executive, and political abilities--abilities that would allow them to assume the presidency in a heartbeat.

By Peter Scoblic
If you like this article, go to www.tnr.com, which breaks down today's top stories and offers nearly 100 years of news, opinion and analysis