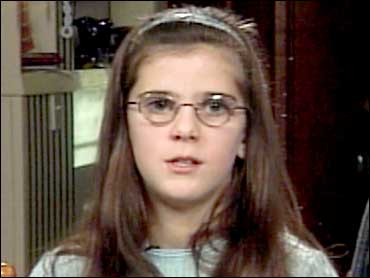 In his State of the Union address on Tuesday night, President Bush delivered a message from a 10-year-old girl named Ashley Pearson of Lincoln, R.I., and he had a message for her:

"I have been a witness to the character of the American people, who have shown calm in times of danger, compassion for one another, and toughness for the long haul. All of us have been partners in a great enterprise. And even some of the youngest understand that we are living in historic times. Last month, a girl in Lincoln, R.I., sent me a letter. It began, 'Dear George W. Bush,' 'If there is anything you know, I, Ashley Pearson, age 10, can do to help anyone, please send me a letter and tell me what I can do to save our country.' She added this P.S.: 'If you can send a letter to the troops please put, Ashley Pearson believes in you.'

Tonight, Ashley, your message to our troops has just been conveyed. And yes, you have some duties yourself. Study hard in school, listen to your mom and dad, help someone in need, and when you and your friends see a man or woman in uniform, say thank you. And while you do your part, all of us here in this great chamber will do our best to keep you and the rest of America safe and free."

At home in Rhode Island, Natalie said she found out on Sunday the president was going to use her letter in his State of the Union address.

"I was really psyched how he used it," the 10-year-old said Wednesday on The Early Show. "I'm glad that the troops got the message that I care for them."

Her father, Thomas, said, "You don't get any prouder." After hearing his daughter's letter read by the president, he says, "I was way up there. She did a great job."

Parties Invite Cuddling Up to Strangers

In the past, Ashley has written Christmas cards to presidents, her mother, Natalie Pearson, noted, but this letter was different. She said, "She's done it before, so it didn't surprise me. This was just a more intense, long letter, and very well written, obviously. And we were very excited for her that she was involved in it. She truly wanted to help."

"The reason our country needs saving is because "it's not all safe," Ashley said. "For some people, it is just not that all right and they just need some help sometime. So if they needed any help with anything, I just wanted to help them."

And she backs her words with her deeds. She already had helped out a school in Louisiana with a pencil project.

She explained, "I was in third grade and my teacher has a daughter that teaches in Louisiana, and they're very, very poor. And I went home and the next day I went to school, I had a bag of pencils and a $5 bill to give to my teacher to give to her daughter to buy school supplies for the kids. And my teacher called my mom. My mom and I talked about it and said we could do a raffle and people have to bring in pencils and stuff for the raffle."