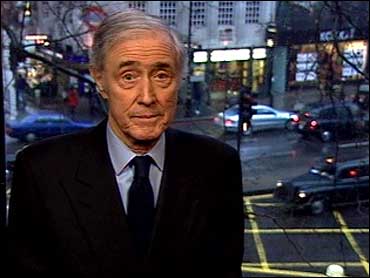 I have been a foreign correspondent for more than 38 years -- two-thirds of that time with a London home address - though mostly, I was actually on the road ... covering almost an entire alphabet of countries from Afghanistan toYemen.

I haven't yet covered a place that begins with "Z", although I almost made it to Zululand once. I was pulled off that story to go to Albania. From "Z" back to "A".

But London is my home away from home. I love this town. The feel of it. Its quirky people, its quaint language, its leisurely rhythms, its lively theater, its dismal weather and I used to say its dismal food, but now even the food is good. It's a little expensive, but I believe you get what you pay for.

Mention President Bush and people roll their eyes, or have a fit. Above all, don't mention the war - the war in Iraq, that is. Whatever America did for this country in World War Two, that's been submerged in the current wave of anti-Americanism. And of course the British aren't the only ones taking a bash at us these days. You should hear what the Germans and French are saying. Mon Dieu!

Some say it's because we've won the Cold War and the free world doesn't need us any more. Or because the White House is being difficult about global warming. Or just because we are the biggest boy on the block.

I think its just one of those periods. Experience tells me that history DOES repeat itself. These fits of anti-Americanism are like the seven year locusts. They come back with alarming regularity. I saw it in the late sixties when America was in Vietnam. I saw it a decade later when the cause was American missiles in Germany.

Now it's President Bush and everyone is telling us we elected the wrong president. It won't last, of course. Some day Europeans will learn to love us again. For a while.