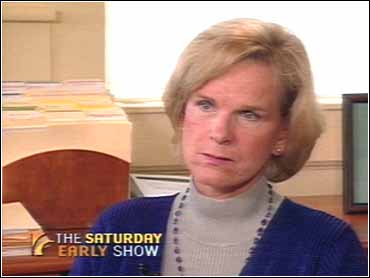 It may seem hard to believe during this time of national prosperity but the fastest growing segment of the homeless population is families. CBS News Correspondent Thalia Assuras reports on one woman's attempt to remedy the problem of homelessness in her community and around the country.

Thirty year-old Robert, his 22-year-old wife Amber, and their two children lost their home in September.

With only the income from Robert's full-time job as a telemarketer, the couple just couldn't make ends meet. "I was always behind, you know? So I couldn't catch up at all, let alone being ahead," says Robert Adair.

And falling behind meant that every night last month, the Adairs found food and shelter in a church basement, a refuge established by the National Interfaith Hospitality Network, a national non-profit organization.

Karen Olson is the network's founder: "It's a broken heart to see people in need, but it's a tremendous joy to be able to help in some way or to expand a program that has so many volunteers."

In 1982, Olson was a marketing executive working in New York City. One morning, while rushing to a meeting, she stopped and on a whim, bought a sandwich for a homeless woman.

"You've got to look at people from the inside out," says Olson. "If you get to know them as people you care about them. You don't see the exterior."

When Olson told her two young boys about her experience, her 10-year-old, Doug, suggested that they do more.

At first they started small. Says Olson, "We'd come...with a couple bags full of sandwiches and we might have some mittens and hats and sometimes we'd have cards with the addresses and shelters."

Olson and her sons began a Sunday tradition of giving food to the dozens of destitute men and women who had made New York City's bus terminal their home.

Olson also found the problem was much closer to home than a city bus terminal: "I thought homelessness was a New York phenomena. I didn't think there were homeless people in New Jersey. Certainly not in my community or my county."

Discovering that thousands of families were in the same predicament across the country, Olson took a huge step. In 1985, she quit her job to start the Interfaith Network. "I think it's a disgrace in this country, that in a country affluent as ours, that people have to sleep in doorways, hat families have to call their car home," she says. "And that's just unacceptable to me."

The organization Olson founded depends on volunteers from churches and synagogues in local areas across the country. The congregations, rotating weekly, provide sleeping space and three meals a day for up to three families at a time.

But Olson says the work has onljust begun. "It's up to each one of us to develop a public will to make a difference and to solve this tragedy of homelessness. It doesn't have to be."

If you would like more information about the National Interfaith Hospitality Network, you can look them up on the Web or call them at 1-908-273-1100.