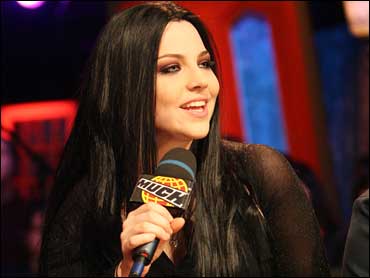 Amy Lee of Evanescence announced her engagement Tuesday during a taping of an hour-long special on the Canadian music network MuchMusic.

Noticing an engagement ring on the singer's finger, host VJ Devon Soltendieck asked Lee, "I notice there's a little — well, not little, it's pretty big. There's a little rock on your finger, and I'm sorry, I have to ask about it."

"I got engaged last night," the 25-year-old singer said.

Lee added that her fiancé got down on one knee. "It was awesome," she said.

2A spokeswoman for Lee's record label, Wind-up Records, confirmed the engagement to The Showbuzz. Lee's fiancé is her boyfriend Josh, who does not work in the music industry. The spokeswoman did not release Josh's last name or age.

Lee's fiancé popped the question while the band was in Toronto to perform at the Air Canada Centre.

The two have been dating for about a year. It will be Lee's first marriage.