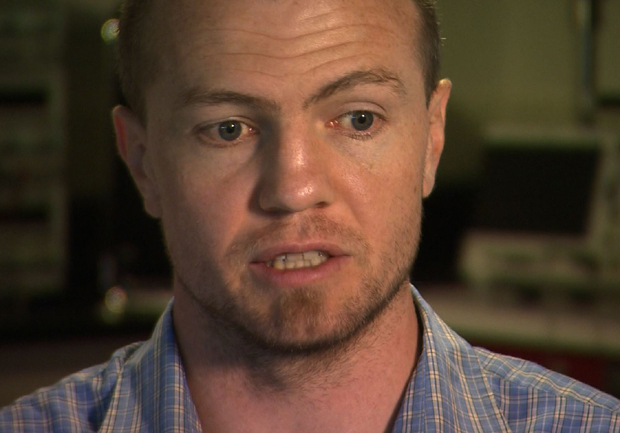 Four years ago, Zac Vawter lost his lower right leg in a motorcycle accident. After years in a regular prosthetic leg, he's been testing the first one controlled by brainwaves.

"I seamlessly walk up a set of stairs and just go up foot over foot up the stairs, like you do," Vawter said, "whereas with my normal prosthetic I have to drag it behind me as I go up the stairs."

In Wednesday's New England Journal of Medicine, researchers described how it works.

When a person thinks about moving, a signal is sent from the brain down through the spinal cord. These impulses control the muscles. After an amputation, the muscles are no longer there but the nerves are. Zac underwent surgery to move these nerves to his hamstrings. Sensors relay these nerve signals to a computer, which instructs the knee and ankle how to move.

"We've rewired him," said Levi Hargrove, a research scientist who helped engineer the device with a team at the Rehabilitation Institute of Chicago.

"So you just think about moving along, the device pushes you along, pushes you up stairs, helps control you when you walk down stairs and it does everything in a seamless matter," Hargrove said.

"It really blew my mind the first time we did that," Vawter said. "It was a pretty amazing experience because I hadn't moved my ankle in a way that I could see for two years or whatever it was."

The Army funded this research, hoping to improve the lives of the more than 1,200 soldiers and approximately 1 million Americans who have lower leg amputations.

"We really trying to make these advanced devices that will allow them to get back to active duty or later in life allow them to move around their home and remain independent longer," Hargrove said. "That's one of the primary goals of this research."