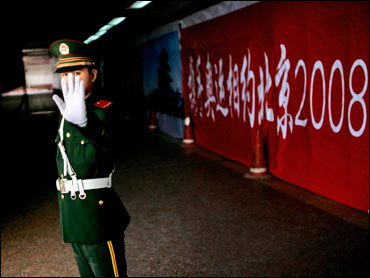 China has failed to improve its human rights record in the run-up to next month's Olympics, with the government intensifying its crackdown on activists in recent years, Amnesty International charged in a report released Tuesday.

The report entitled "The Olympics Countdown - Broken Promises," which accuses Chinese authorities of "tarnishing the legacy of the Games," came as the International Olympic Committee clarified that many Web sites will be blocked under controls applied by the communist government.

The clarification followed months of promises to journalists that China would allow unfettered access to the Internet during the Olympics, which begin Aug. 8.

Amnesty said that the Games, touted by Chinese and Olympic officials alike as a way to help expand freedoms in the authoritarian country, have instead led the government to muzzle critics in hopes of presenting an image of harmony and stability to the outside world.

"By continuing to persecute and punish those who speak out for human rights, the Chinese authorities have lost sight of the promises they made when they were granted the Games seven years ago," said Roseann Rife, a deputy director in Asia for the London-based group. "The Chinese authorities are tarnishing the legacy of the Games."

Amnesty said that in the last year alone, thousands of petitioners, reformists and others were arrested as part of a government campaign to "clean up" Beijing before the Games. It said many of those arrested have been sentenced to manual labor without trial.

Amnesty also accused the International Olympic Committee of showing a "reluctance" to pressure China publicly on its human rights record.

Messages left with IOC spokeswoman Giselle Davies asking for comment on the Amnesty report were not immediately returned.

Hein Verbruggen, the head of the IOC panel coordinating the Beijing Games, said last month that despite outside criticism of China's record on human rights and other policies, the Olympics will be a "force for good."

Foreign Ministry spokesman Liu Jianchao rejected Tuesday's report, saying that people "who know China will not agree with this report."

"We hope Amnesty can take off the tinted glasses it has worn for many years and see China in an objective way," he said during a regularly scheduled news conference.

In one recent shift, the government announced it was setting up special protest zones during the Games.

The designated protest areas will be in parts of three public parks, none of them closer than several miles from the main Olympic stadium. Human rights campaigners have assailed the protest zones as cosmetic, with one likening them to a "fishbowl" - sealed off from society at large.

While protests have become common throughout China - from workers upset about factory layoffs to farmers angry about land confiscation - the communist leadership remains wary about large demonstrations, fearing they could snowball into widespread anti-government movements.

After foreign groups critical of China's human rights, media controls and foreign policies in places like Sudan's Darfur area began targeting the Olympics a year ago, Beijing ramped up an intelligence-collection effort to identify critics to keep them out. The melee of protests that greeted Beijing's international torch relay in April brought a redoubling of efforts.

Excerpts From The Report:

"Chinese courts continue to sentence to death and execute thousands of individuals every year. Those facing capital charges do not receive fair trials in line with international human rights standards. … Several incidents of miscarriages of justice, in some cases leading to the execution of the innocent, have been published in the Chinese press and have generated disquiet among the public at large. While stressing that the time is not yet ripe for abolition, the Chinese authorities have repeatedly declared, especially in international forums, that their eventual goal is to end the death penalty.

"In violating the right to life and the prohibition of torture and cruel, inhuman and degrading treatment, the death penalty fundamentally undermines the 'preservation of human dignity' which lies at the heart of the Olympic Charter."

On Detention Without Trial:

"The Chinese authorities continue to rely on abusive systems of punitive administrative detention against a variety of "offenders" including, in many cases, peaceful petitioners and human rights activists. The police enjoy unchecked authority to impose such punishments without charge, trial or judicial review. … Far from acting as a catalyst for reform, the authorities have used Beijing's hosting of the Olympics as a pretext for extending the use of punitive administrative detention, notably "Re-education through Labour" (RTL) and "Enforced Drug Rehabilitation" (EDR). The police have specifically targeted petitioners and rights activists in their efforts to 'clean up' Beijing ahead of the Games."

On Media And Internet Freedom:

"In view of current patterns of media censorship and control in China, concerns remain that the authorities may seek to block broadcasting of anything deemed sensitive or inappropriate during the Olympic Games. Despite the introduction of new media regulations increasing the freedom of foreign reporters to cover news stories in China, overseas journalists continue to report being obstructed or hampered from conducting interviews. The Foreign Correspondents Club of China (FCCC) documented approximately 180 incidents in 2007. By July 2008, this had increased to 230, including over 40 cases after the unrest in Tibet in March and more than 12 after the Sichuan earthquake in May. …

"Chinese journalists continue to operate in a climate of official censorship and control, with many still languishing in jail for reporting on issues deemed politically sensitive. Internet controls have been increasingly tightened as the Olympics approach with control, regulation and censorship extending to various categories of internet users, including Internet Service Providers, bloggers and website owners. Numerous websites have been closed down for providing information deemed sensitive by the authorities. Internet users who post such information risk detention, prosecution and imprisonment."