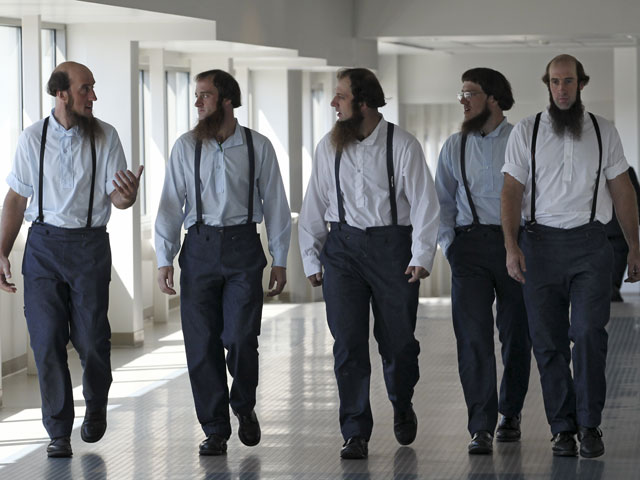 (CBS/AP) CLEVELAND - An Amish bishop was so ashamed after a hair-cutting attack that he stopped preaching and refused to attend a family wedding because he didn't want anyone to see him without his beard, his son testified Wednesday.

The testimony came at the trial of 16 Amish men and women accused of carrying out a series of hate crimes on Amish church leaders in Ohio.

Andy Hershberger said after the attack his 77-year-old father was crying and "shaking all over."

Federal prosecutors say that a dispute between the leader of a breakaway Amish group and other bishops who sought to overrule his authoritarian methods led to the hair- and -beard cutting attacks that struck fear into Ohio's normally peaceful Amish community.

Those accused of planning and taking part in the attacks targeted the hair and beards of Amish bishops because of its spiritual significance in the faith, prosecutors said. Most Amish men do not shave their beards after marriage, believing it signifies their devotion to God.

Prosecutors say there were five different attacks last fall. The defendants who live in a settlement outside the tiny town of Bergholz near the West Virginia panhandle could face lengthy prison terms if convicted on charges that include conspiracy and obstructing justice.

Attorneys for the defendants have not denied that the hair cuttings took place and said in the opening statements that members of the breakaway group took action out of compassion and concern that some Amish were straying from their beliefs. Defense attorneys also contended that the Amish are bound by different rules guided by their religion and that the government shouldn't get involved in what amounted to a family or church dispute.

The attack on Raymond Hershberger took place at his farm in Holmes County, said his son who lives on the same land. The county is home to one of the nation's largest Amish settlements.

Andy Hershberger testified that five men arrived at his house on an October evening and said, "We want to talk with you and your dad." Once inside, one of the defendants, whom he identified as Johnny Mullet -- son of accused ringleader Sam Mullet Sr. -- stood up and said: "We're from Bergholz. We're here to do what you did to our people."

Hersherger described a chaotic scene, with the men holding down him, his father and his brother. He said his father covered his head, pleading "Don't shear me, don't shear me."

Prosecutors showed jurors a photo of a man, identified by Hershberger as Johnny Mullet, standing over his father and holding him near his throat during the attack. Another suspect had taken the pictures with a disposable camera, investigators said.

Hershberger said clumps of hair were missing from his father's head and his scalp was bleeding a bit. Only an inch of his beard, which had hung to the middle of his chest, was left. He didn't preach again until his hair grew back.

"He was so ashamed with the way he looked," his son said. "He was heartbroken."

Hershberger said the attackers grabbed him by the beard too and tried to shave it.

But the clippers stopped working, he said, and the men left.