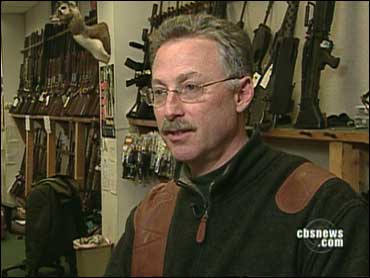 Business is booming at gun shops across the country, reports CBS news correspondent Jeff Glor. And at his store, Moss says it's because of uncertainty fueled by the economic crisis.

"If the banks didn't have any money there'd be rioting in the streets," says Moss. "So you're protecting yourself from Americans going crazy, rioting, looting and hurting each other."

FBI statistics show that in November, 2008 firearm purchaser background checks increased 42 percent over the previous year. In December they were up 24 percent.

Moss says his sales are up something like 300 percent.

Moss also believes says fears that President Obama might make it more difficult to get a gun have led people to flock to his Norwalk, Conn. store.

One of those is 24-year-old Anthony Silvestro, a first time buyer.

Silvestro, who runs an auto body shop, says he's worried Mr. Obama might raise taxes on new gun purchases. He also worries that people will become more violent if the economy gets worse. He's getting a gun for personal protection.

"When you have a mixture of defensive people, lack of money, economy getting bad, you've got people that are depressed, people that might be upset---you know carrying a gun around you feel comfortable, you feel like you have a little power," Silvestro says.

But some fear that more guns will lead to increased gun thefts by criminals - and more deaths in the home.

"It can be the 4-year-old who finds a gun and thinks it's a toy and shoots his sister," says Paul Helmke, president of the Brady Campaign to Prevent Gun Violence. "It can be the husband and wife that are having a quarrel and the guns there and all of a sudden one of them is dead."

The National Rifle Association disputes that, saying that firearms are used three to five times more often to stop crimes than commit them. Moss stresses that in Connecticut, buyers need a pistol permit which requires background checks and a series of lessons at his shooting range.

According to the Brady Campaign, if you have a gun in your home it's 22 times more likely to be used against you and or a family than it is to protect you.

The NRA questions that, saying that 58 percent of firearms deaths in the home are suicides.

There are no official figures on the number of guns in the United States - but estimates say the number is about 250 million.

Cat reunited with owners 16 years after running away
Jeff Glor