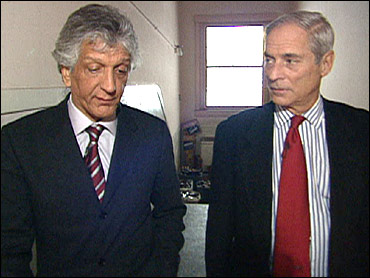 One of the deep, dark secrets of America's past has finally come to light. Starting in the early 1900s, hundreds of thousands of American children were warehoused in institutions by state governments. And the federal government did nothing to stop it.

The justification? The kids had been labeled feeble-minded, and were put away in conditions that can only be described as unspeakable.

Now, a new book, "The State Boys Rebellion," by Michael D'Antonio, reveals even more: A large proportion of the kids who were locked up were not retarded at all. They were simply poor, uneducated kids with no place to go, who ended up in institutions like the Fernald School in Waltham, Mass.

The Fernald School is the oldest institution of its kind in the country. At its peak, some 2,500 people were confined here, most of them children. All of them were called feeble-minded, whether they were or not.

The people who ran Fernald back in the bad, old days are no longer alive, but many of the victims still are -- victims like Fred Boyce, who was locked up there for 11 years. He came back to Fernald with Correspondent Bob Simon.

"We thought for a long time that we belonged there, that we were not part of the species. We thought we were some kind of, you know, people that wasn't supposed to be born," says Boyce.

And that was precisely the idea.

The Fernald School, and others like it, was part of a popular American movement in the early 20th century called the Eugenics movement. The idea was to separate people considered to be genetically inferior from the rest of society, to prevent them from reproducing.

Eugenics is usually associated with Nazi Germany, but in fact, it started in America. Not only that, it continued here long after Hitler's Germany was in ruins.

At the height of the movement - in the '20s and '30s - exhibits were set up at fairs to teach people about eugenics. It was good for America, and good for the human race. That was the message.

But author Michael D'Antonio says it wasn't just a movement. It was government policy. "People were told, we can be rid of all disease, we can lower the crime rate, we can increase the wealth of our nation, if we only keep certain people from having babies," says D'Antonio.

He says back then, schools tested children regularly, and those classified as feeble-minded got a one-way ticket to Fernald -- or to one of the more than 100 institutions like it.

"Idiot, imbecile, and moron were all medical terms. They were used to define various levels of retardation or disability. Moron was coined to describe children who were almost normal," says D'Antonio. "I would estimate that at least 50 percent would function in today's world well."

Fred Boyce was just 8 years old in 1949 when his foster mother died, and the State of Massachusetts committed him to Fernald.

Boyce's records from Fernald show they labeled him as a "moron", even though tests showed his intelligence was within the normal range, not bad for a boy with no education at all. He was kept there for 11 years.

Boyce says he thinks the state recommended that he come to Fernald because it was the easy way out: "They didn't have to look for homes for you, so they could just dump you off in these human warehouses and just let you rot, you know. That's what they did. They let us rot."

Most of the school is closed now, including Boyce's old dorms, which will be torn down soon. Approximately 36 children slept in each room, with the beds jammed together. And the children received little education and less affection.

Regimentation? There was no shortage of that. And how long would they stay at Fernald? The kids were told they could be here for life, that there was no exit.

Almeida, an abused child, was only 8 when his father took him for a drive to the Fernald School, and told him to wait in the hallway.

Almeida had no idea where he was, and no idea that he now wore an invisible label, which read "moron." He ended up in the same dorm as Boyce, and they spent their mornings in the "schoolroom." At least, that's what the room was called.

"It was a school in name only. A child would experience the first year of school 5 or 6 times in a row," says D'Antonio. "He would read the same 'Dick and Jane' reader, and never make any progress because the school wasn't equipped to actually educate children. It was there as a sort of holding pen."

The children did most of the manual labor at the school.

"The kids at Fernald raised the vegetables that they ate. They sewed the soles on the shoes that they wore. They manufactured the brooms that they used to sweep the floor," says D'Antonio, who adds that the school made sure that at least 30 percent of the kids admitted had normal or near normal intelligence.

The school needed those kids to work. "You had to have somebody with a certain level of intelligence in order to run this place," says Boyce. "And I can remember being out in the gardens from morning until night in the sun."

Almeida, however, had an unusual job, and the fruits of his labor are still there 50 years later. His job was to cut up the brains of severely retarded people who had died at Fernald. He cut them into thin slices so scientists could study them. Nothing ever came of the research, but the bits of brains are still there.

"They're still sitting here years later," says Almeida. "I mean, what was it all for?"

Worse than the work, says Almeida, was the abuse he suffered from the attendants who staffed the place. It was called "Red Cherry Day," and the kids would sit in a circle and be called up alphabetically.

"And lucky me, my name is what? Almeida. You'd get up in front of all these kids, and you would pull down your pants," recalls Almeida. "You'd pull down your underpants and they'd make you turn around and they'd whack your ass with this branch until it was red like a cherry."

Almeida says few of the attendants showed any kindness, and some of them should have been institutionalized themselves: "These people were sick that worked here."

And of course, there was sexual abuse. The place was tailor made for it.

As the boys grew older, many rebelled, often by running away. They always got caught.

Boyce showed Simon what happened then. The kids were taken to the infamous Ward 22, the school's detention center.

"Couldn't escape, you know, this was the prison," says Fred, who was locked up in solitary confinement here. "And they had a little mattress on the floor there."

As a further humiliation, kids were stripped naked. Back then, the windows had bars. "You're just this child, and you're in this cell because you ran away," says Boyce. "And you ran away for reasons of abuse and thinking that you don't belong here. You wanna have a life outside."

Boyce finally got that life in 1960, when he was 19. Eugenics was no longer politically acceptable in America, and Fernald started releasing people. The problem was, there weren't a lot of jobs around for alumni of a school for the feeble-minded.

Boyce joined the carnival circuit, traveling around the country, mixing with people who didn't need to see diplomas – surrounded by reminders of what his childhood could have been.

"I see these happy families, you know, and I see how much they love their kids. And I think, you know, 'I can never have that,'" says Boyce.

What would their lives have been like, if they hadn't been sent to Fernald?

"The one thing I can imagine is that their lives would have had a lot more love in them. I've had men tell me, 'I never saw a man or woman who loved each other growing up. I never saw family life. And it's been impossible for me to find it as an adult,'" says D'Antonio. "That's the part that gets me most upset, is they were denied the human relations that sustain all of us."

Almeida got out of Fernald the same year as Boyce, but when he hit his 40s, he found himself drawn back to the place. It was the only home he'd ever really known.

But Fernald had changed, and only the seriously handicapped were living there now. So Almeida applied for a job and worked there as a driver for 20 years. He retired last year.

"I always felt like they owed me. I always felt that they owed me, because they took the most important thing of my life away," says Almeida. "They took away my childhood and my education. The two things that you need in life to make it, they took from me."

And that's not all. More than 30 years after Boyce and Almeida were released, they found out that the school had allowed them to be used as human guinea pigs.

In 1994 Senate hearings, it came out that scientists from MIT had been giving radioactive oatmeal to the boys - men now - in a nutrition study for Quaker Oats. All they knew is that they'd been asked to join a science club.

"But they forgot to mention the milk was radioactive," says David White-Lief, an attorney who worked on the state task force investigating the science club.

He says he was outraged that the children were exploited without their knowledge. "It's my contention, and it was my contention on the task force, that these experiments, because of the lack of informed consent, violated the Nuremburg Code established just 10 years earlier," says White-Lief. "The lesson of Nazi Germany was we don't do experiments on people without informed consent. They didn't use the word "informed consent" - without knowing consent."

Boyce, also in the science club, got a group of members together and they sued. Each received approximately $60,000 in compensation from MIT, Quaker Oats and the government.

But Boyce and Almeida never got what they really wanted: an apology for sending them to Fernald and calling them morons, a label that remains on their state records to this day.

Boyce, who is 63, says he has never received an apology from the State of Massachusetts or from any agency at all. What stays with him the most, says Almeida, is being labeled a moron, and "never getting to know what I could have been."

Today, kids like Fred Boyce and Joe Almeida are placed in foster homes and attend public schools. The dark era of institutionalization ended in the '70s at Fernald. Since then, it's become a home for mentally and physically handicapped adults, and it's about to be closed down forever.