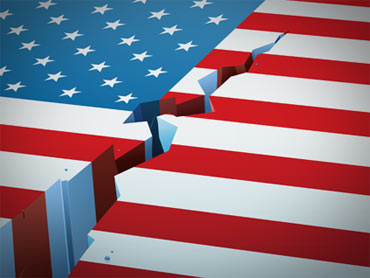 
Deliveryman Mike Sweeney used to just drive over the Lake Champlain Bridge to get to work. But it closed suddenly last fall with almost no warning. Now, Sweeney has to row to work.

CBS News correspondent Richard Schlesinger reports the American Society of Civil Engineers issues a report cardevery 4 years on the state of America's infrastructure. The last one in 2009 was not good at all. The overall grade was a "D."

"Back in 2005, we also did a report card and it was still a "D" there, so we haven't gained any ground," said Andrew Herrmannwho helped write the report card. It examined every aspect the country's infrastructure. Bridges got a "C" - but even with that average grade, 12 percent of the more than 72 thousand bridges are too old or what's politely called structurally deficient.

"We've been ignoring our infrastructure for decades," Herrmann said. "We've been under-investing in what we have."

The problem with bridges became impossible to ignore in 2007, when the I-35 bridge collapsed in Minneapolis.Thirteen people died.

Last October, engineers became so alarmed after an underwater inspection of the pilings holding up the Lake Champlain Bridge - that they closed it with just 10 minutes warning. No lives were lost, but life has not been the same since.

Lisa Cloutier owns what used to be known as the Bridge Restaurant until she decided to change the name on the Vermont side of Lake Champlain.

"Eighty-percent of my business came across that bridge," Cloutier said.

On a snowy day last December she watched them blow up the bridge. It wasn't worth saving.

Now, the only way across is either by ferry or 90 minute drive. A new bridge will cost at least $70 million dollars.

Spending money is part of the solution. China spends 7 percent of its Gross Domestic Product on its infrastructure. India spends 5 percent. The United States spends less than 2 percent. Engineers think the U.S. will have to spend $2.2 trillion over 5 years to bring the overall grade for infrastructure up to an 'A.'

Herrmann's concerned that it will be tough to seel taxpayers on this spending.

At the University of Michigan, Dr. Victor Liis close to perfecting a new kind of concrete - flexible concrete. It's one bright idea that could have a big payoff. Li's concrete is not only flexible, but it also heals itself. Any cracks that form will expose millions of tiny microfibers that form a seal when exposed to air and water. The cracks fill themselves in before they compromise safety.

Dr. Li said that a bridge made of self-healing concrete would have an average life-span of 100 years. The problem is self healing concrete will probably cost 3 times as much as the regular stuff. But the experts say there's no getting around it - any improvement to any infrastructure - is going to cost money.

"We're going to have to do that now for the future, for our grandchildren," Herrmann said.

The engineers insist if we don't start spending money and spending it wisely, more and more Americans will end up in the same boat as Mike Sweeney - and soon.