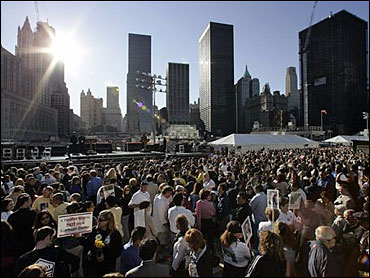 
The flags of more than 90 nations provided the backdrop in the State Department's ornate Benjamin Franklin Room. Secretary of State Condoleezza Rice stood at the podium in front of several hundred diplomats and dignitaries to mark the fifth anniversary of 9/11.

While more than 2,700 Americans lost their lives that day, hundreds of foreign citizens also died in the terrorist attacks. Officials say an exact number of foreigners killed is impossible to determine because many held American citizenship as well as that in the country in which they were born.

Relatives of several of the fallen read a roll call of each nation that suffered losses while a member of the U.S. Navy's Ceremonial Guard rang a ship's bell to signal remembrance and respect. From Argentina, China and Pakistan to Malawi, Sri Lanka and Zambia, each country was remembered individually, its flag bearing silent witness to the gathering. The list comprised the rarest of international clubs, one which counted Iran, Cuba, Israel and Syria among its members. No application was necessary — and there was no choice on whether or not to join.

"The attackers' reign of terror knows no boundaries, neither of territory nor morality," Rice said. "The Sept. 11th attacks were not only an attack on our people, but also on the noblest aspirations of all people."

In the past five years, we know terrorists have struck all over the world. Rice mentioned attacks "in places like Great Britain and Egypt and Indonesia and Turkey and Iraq and in Russia.

"The attacks only reinforce the clear lesson of Sept, 11. The fight against terrorism is global and in order to prevail together, we must unite together and we must fight together," Rice told the gathering. It was the closest she came to making a political statement.

On Sept. 11, 2001, Rice's predecessor, Colin Powell, was in Lima, Peru, to attend a meeting of the Organization of American States when he got the news of the attacks and quickly made arrangements to head home. After America's hemispheric neighbors hastily expressed their solidarity with the United States, Powell quickly left the meeting to return to Washington.

For her part, Rice reversed the travel plan. Once the remembrance ceremony concluded, she left Washington to fly to Halifax, Nova Scotia. Rice told reporters traveling with her she was going to thank the Canadian government and especially the people of Halifax "who in the moment of need on that September day came to the aid of so many people who were travelers." With America's airspace closed after the attacks, many people were stranded in Halifax for days.

Population Decline Is Bad For Us
David Hancock