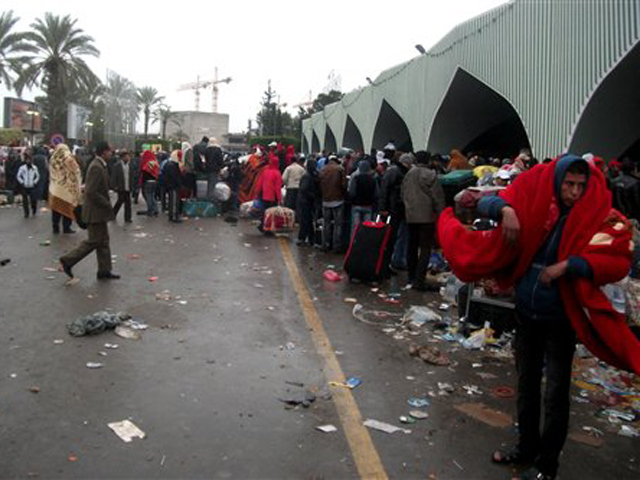 Americans trapped in Libya are becoming increasingly desperate to get out, while the Obama administration is being careful about its rhetoric for fear embattled Libyan leader Muammar Qaddafi may target U.S. citizens still trapped there.

American Brad Hollier described his difficult escape and incredible scenes of massive, chaotic crowds in a Libyan airport to Early Show co-anchor Erica Hill after escaping to Malta with his family.

"It was pretty scary for my wife and son to go through. We weren't sure how we were going to make it through. Luckily, we had a driver who could negotiate us through these checkpoints, arrive at the airport only to see the crowd get larger." Hollier said.

Several airlines suspended flights to Libya on Thursday - Lufthansa, Austrian Airlines and Alitalia - amid scenes of chaos and deteriorating security and safety at Tripoli airport.

Americans who eagerly climbed aboard the Maria Dolores ferry at Tripoli's As-shahab port on Wednesday faced a long delay in their travel plans. Strong winds have been whipping up high waves in the Mediterranean Sea, and the 600-passenger catamaran ferry was not likely to leave for Malta until Friday.

"The ferry will depart when the weather improves. At the moment, we're anticipating this will happen by tomorrow morning, but we're waiting for an updated weather report," said Elijah Waterman of the U.S. Embassy in Malta.

"Citizens are safe on board," tweeted U.S. State Department spokesman P.J. Crowley. The voyage takes up to eight hours.

Those who made it out of Libya described a frightening scene - with bodies hanging from electricity poles in Libya's eastern port of Benghazi and militia trucks driving around loaded up with dead bodies. One video showed a tank apparently crushing a car with people inside.

In Crete, some passengers smiled and waved from the decks of the Greek-flagged Hellenic Spirit, which sailed from Benghazi, a city that has broken away from the control of Qaddafi. Others departing the ship needed medical attention.

"The situation was pretty bad over there ... we heard lots of gunfire and saw many burned-out buildings," Pantelis Kimendiadis, a Greek oil worker employed at a plant near Benghazi, told The Associated Press moments after stepping off the ferry.

"Everyone is really tired and just glad to be out of there ... We have Libyan friends and colleagues who got us out. Our lives were in their hands," he said.

Two ships did brave churning seas Thursday to whisk 4,500 Chinese workers away to the island of Crete.

Up to 15,000 Chinese are expected to arrive by ferry on Crete and fly home on chartered flights in one of China's largest foreign evacuations in recent times. China has more than 30,000 citizens in Libya working on construction and oil projects.

In London, the British government was holding an emergency meeting to decide whether the military needs to evacuate almost 200 U.K. oil workers and their colleagues from other countries. Foreign Secretary William Hague said the panel would discuss evacuation options with Defense Secretary Liam Fox.

Hague said he did not rule out the use of British special forces to rescue the 170 British workers marooned in desert camps away from Libya's major cities.

Officials said the British navy frigate HMS Cumberland was expected to dock at Benghazi and transport passengers to Malta.

Turkey managed to evacuate more than 7,000 of its 25,000 citizens in Libya, mostly by two ships that arrived Thursday in the southern Turkish port of Marmaris, and said it would evacuate more foreigners from Libya.

Ali Tumkaya, the human resources manager for Turkey's Sembol company, which was building a university in Benghazi, said militias raided the Benghazi airport. He saw vans with more than 20 dead bodies, who Tumkaya said appeared to be mercenaries from sub-Saharan Africa.

Another Turkish evacuee saw dead men hanging in the street.

"Our construction site was burned down. The looters came. There were a few men hanging from poles, electric poles," Serdar Taskin, who worked for the Mammar Arabia company in Benghazi, told the AP in Marmaris. He did not know if the dead were protesters or Gadhafi supporters.

George Suchomel, a Canadian from Collingwood, Ontario, who works for the German construction company Arcadis, said his company's offices and lodgings in Benghazi were raided and cars and electronic equipment were looted.

Suchomel, who was evacuated by a Turkish ship, gave AP a video that he said was given to him by militiamen in Benghazi to smuggle out. It showed the aftermath of a scene in which a military tank seems to have run over a red car with some people still trapped inside and others running around frantically and shouting.

Germany rerouted two navy frigates and one support ship to help with evacuations and had two military aircraft on standby in Valetta, Malta.

Libyan authorities, meanwhile, were making it difficult for airlines to obtain landing permits for charter flights into Tripoli. That, and other operational and safety problems including deteriorating airport security, forced some airlines to halt operations in Libya.

In addition to its maritime effort, Greece sent three military transport planes to Libya on Thursday to bring home 300 citizens, most of them construction workers.

A plane carrying 125 Ukrainians and 38 foreigners from Libya landed at Kiev's Boryspil airport early Thursday. A Polish government plane that was supposed to carry 80 Poles back home arrived in Warsaw with only 15 Poles and several foreigners because many people could not make it to Tripoli's airport.