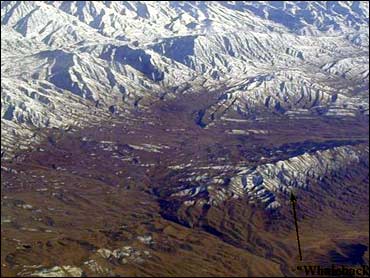 U.S. military planes and troops are scouring Afghanistan's daunting Hindu Kush mountains for six Americans who were aboard an aircraft that disappeared over the weekend.

It is unclear whether the cargo plane managed to make an emergency landing despite the tough terrain. Efforts to locate the aircraft, which carried three crew members and three soldiers, were hampered by heavy snow.

"We don't want to go premature and say that it has crashed," spokesman Maj. Mark McCann said. "Until we can get a search team into the area, we are hoping for the best."

The plane took off on Saturday from the main American base at Bagram, north of the capital, Kabul, but never reached its undisclosed location or any other airfield.

Tracking a signal from its emergency locator transmitter, McCann said rescuers have identified an area of central Afghanistan where the plane may have come down. But he said they were hampered by a storm Sunday that has coated the mountains with snow.

Ghulam Mohammed, a senior police official in central Bamiyan province, said military helicopters are searching the nearby Baba Range, which rises to 16,600 feet, but didn't know if the plane or its passengers had been found.

McCann declined to give details of the rescue operation, saying it could endanger troops on the ground.

The CASA 112 transport plane was operated by Florida-based Presidential Airways and was contracted to the U.S. Air Force in Afghanistan, McCann said.

The fixed-wing plane is designed to fly in and out of the kind of short, rough air strips used to supply American forces deployed in remote areas of the country to search for Taliban and al-Qaida militants.

Accidents have accounted for most of the more than 100 deaths of U.S. service members since Operation Enduring Freedom began in the wake of the Sept. 11, 2001, attacks on the United States.

Many have involved helicopters, and the most recent fatality was that of an American airman fatally wounded on Oct. 20 when his search-and-rescue chopper crashed near the Iranian border due to technical problems.

The last combat deaths were those of two U.S. soldiers killed by a roadside bomb last Wednesday in Uruzgan province.