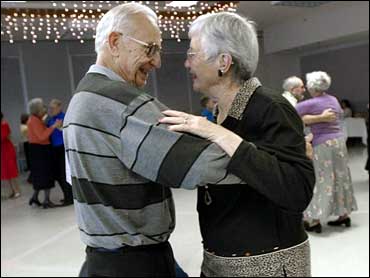 Even when sweeping, waiting tables and tossing a Frisbee count as exercise, most Americans still aren't getting enough of it.

The Centers for Disease Control and Prevention, believing earlier studies failed to accurately measure Americans' fitness because they focused on intense exercise, has lumped everyday activities such as housework and gardening with jogging and lifting weights.

But even with playing with children and raking the lawn on the list of moderate-intensity activities, the 2001 phone survey released Thursday showed that 55 percent of adults still didn't get the recommended minimum: 30 minutes a day, at least four days a week.

"It's surprising," said Harold Kohl of the CDC, who authored the study. "There's still more than one out of two Americans who are not active at a level we think promotes health. From an overall health standpoint, ... we've really got to move the needle substantially from where it is right now."

The 2001 survey results were better than under the old definition of exercise used in the 2000 survey, when 74 percent of adults missed the recommendations, but still too low, health officials said.

The survey found little change in the proportion of adults who said they didn't do any kind of significant exercise - 26 percent in 2001 and 27.4 percent in 2000. It also found that Kentucky had the lowest percentage of people who got the recommended amount of exercise, while Wyoming had the highest.

The recommendations are just the minimum to prevent people from developing chronic diseases such as high blood pressure or diabetes. The Institute of Medicine says people should double the CDC's recommendations - 60 minutes of moderate exercise a day - to drop pounds.

"If you really, really want to lose weight, you have to do more than that," said CDC spokesman Mary Kay Sones. "The message from CDC and public health is prevention - be aware that if you're putting the weight on it's going to be very hard to get it off - try to be aware not to put it on in the first place."
The CDC said it loosened the definition of exercise to obtain "a more comprehensive picture of Americans' daily lifestyles."

Moderate activities include walking at a brisk pace, ballroom dancing, playing in a marching band, shoveling snow, and moderate housework such as scrubbing floors, washing windows and vacuuming.

For those daunted by even moderate exercise, the CDC has a list of even less intense activities it says would be at least a step in the right direction, including making photocopies, playing video games, coloring, sitting in a whirlpool bath, floating and "purposeless wandering."

The agency says an hour of such light activity is equal to 30 minutes of moderate activity, but light activity wasn't included in the latest survey. Light activity includes almost every activity that involves motion and some that don't: playing table tennis, miniature golf, darts or pool, shooting a pistol, yachting, fishing while seated, even light office work that includes movement of "little more than hands and fingers."

Kohl said moderate-intensity activities are the minimum needed for health benefits but sees light activity as "a gateway to moderate activity for those who aren't that active at all. It's a start."

Health officials say Americans' lack of exercise is one of the nation's most pressing health problems, leading to increases in obesity, heart disease, hypertension or diabetes.

Diet is just as important as exercise, though, Sones said.

"I don't think you can do one without the other," she said. "You have to maintain a sensible diet - it's important we are aware of those things, to cut back on the sugars and high-fat foods and just be aware of how much we are eating."
Written by Daniel Yee