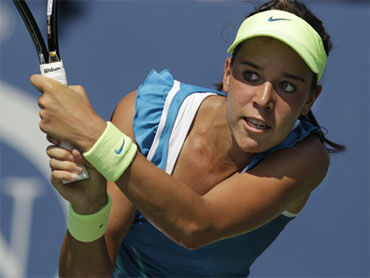 The day after the sensation of last year's U.S. Open departed quietly, another 18-year-old American made her way unexpectedly to the third round.

Capra, who trains at the Evert Academy in Delray Beach, Fla., is the youngest player left in the women's field and the lowest-ranked.

She's playing in her first tour-level main draw, and knocked off 95th-ranked Karolina Sprem in the first round. Next up could be a matchup against Maria Sharapova, who was one of Oudin's victims last year when, at age 17, she made an attention-grabbing run to the quarterfinals.

Ever since last year's magical run at Flushing Meadows, Oudin has been on a more even-keeled learning curve - ranked 43rd in the world and with only one victory in the first three Grand Slam tournaments of 2010.

She came back to New York this year wondering if something about this city and this tournament might inspire another run. She left Wednesday after a disheartening 6-2, 7-5 loss to No. 29 Alona Bondarenko and the sinking realization that even in the Big Apple, encores can be hard to come by.

"I guess I'm a little tiny bit relieved now," Oudin said. "I can kind of start over from all the expectations from last year. And now I can just go out and hopefully do really well the rest of the year and keep working hard."

Other winners in early action Thursday included 19th-seeded Mardy Fish, who defeated Pablo Cuevas 7-5, 6-0, 6-2. Fish, along with No. 18 John Isner and No. 20 Sam Querrey, are America's best hopes after No. 9 Andy Roddick fell late Wednesday night to Serbia's Janko Tipsarevic.

"I've been in a lot of positions in my career, but I've never put myself in a Grand Slam sort of as a guy that people talk about to really do well here," Fish said.

Also winning Thursday was top-seeded Caroline Wozniacki, who needed only 47 minutes to put the "double bagel" - a 6-0, 6-0 win

on Chang Kai-chen of Taiwan.

On court later Thursday afternoon was No. 2 seed Roger Federer, who is trying to win his sixth U.S. Open title.