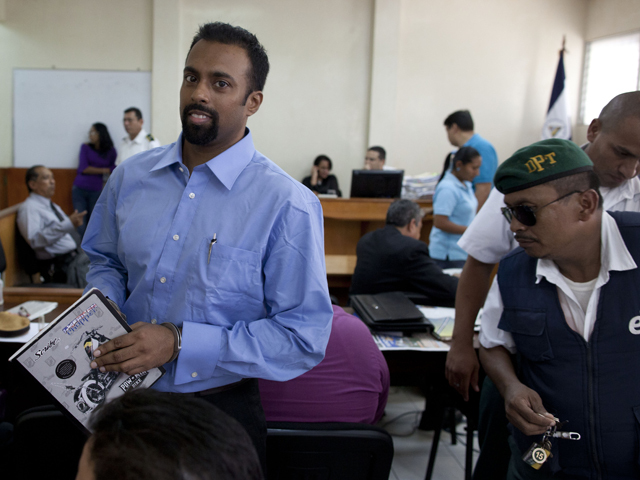 (AP) MANAGUA, Nicaragua - A U.S. citizen jailed for nearly two years in Nicaragua on money-laundering and drug charges was released from prison on Thursday after a court upheld his appeal.

Jason Puracal left the prison hunched down in the back seat of a car being driven by his lawyer without talking to reporters waiting outside.

Fabbrith Gomez, Puracal's lawyer, briefly stopped the car and said that Puracal, who was wearing a blue dress shirt, needed a shower and some rest, and wouldn't be speaking to the media on Thursday. He said his client was staying in Nicaragua.

The case has drawn the scrutiny of U.S. congress members and human-rights groups, including the California Innocence Project, which said Puracal's arrest was illegal and the process appeared marred with inconsistencies.

A three-judge appeals panel in Nicaragua on Wednesday notified both prosecutors and the defense that it ruled to absolve Puracal, withdraw the 22-year sentence he received and free him.

It said in an emailed statement that the sentencing judge had failed to carefully examine the evidence and explain the reasons for convicting Puracal and 10 others. The panel agreed that the judge violated the defendants' rights by not allowing the defense to introduce evidence.

Javier Morazan, chief of organized crime prosecutors, told The Associated Press on Thursday that they had received notification of the ruling but still lacked details on why the charges against Puracal and 10 other defendants in the case were lifted .

"We are going to study this case and then decide what steps we will take," Morazan said.

Puracal settled in the Pacific bay community of San Juan del Sur in the mid-2000s after a two-year Peace Corps mission in Nicaragua. He became a real estate agent and sold beachfront homes to foreigners looking to establish themselves in the surfing community and other towns of Nicaragua and neighboring Costa Rica. Puracal lived in a two-story home overlooking green cliffs and the bay with his wife and their son, born with Down syndrome in March 2007.

On Nov. 11, 2010, masked policeman carrying AK-47 rifles raided Puracal's office and took him to the nation's maximum-security prison just outside the capital of Managua, where he is still held.

Prosecutors charged that Puracal was using his real estate business as a front for money laundering in a region used to transport cocaine from Colombia to the United States. His defense claimed the large bank deposits and withdrawals were all for legitimate home sales, and involved no dealings with drug traffickers.

A judge convicted him in August 2011.

Puracal's sister, Janis Puracal, spoke Thursday on the telephone to The Associated Press from Seattle.

She said relatives had not been able to talk to Jason Puracal since the court decided to vacate the three charges against the 35-year-old Tacoma, Washington man because he had been kept in solitary confinement.