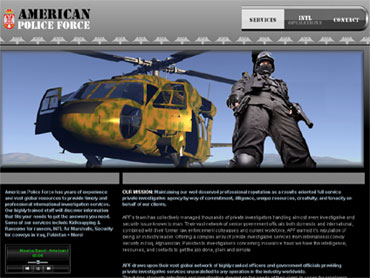 HARDIN, Mont. (CBS/AP) This is the strange story of how American Police Force, a little known company which claims to specialize in training military and security forces overseas, has seemingly taken control of a $27 million, never-used jail, and a rural Montana town's nonexistent police force.

After arriving in this tiny city with three Mercedes SUVs marked with the logo of a police department that has never existed, representatives of the obscure California security company said preparations were under way to take over Hardin's jail, which has no prisoners.

Significant obstacles remain - including a lack of any contracts to acquire prisoners from other jails or other states.

And on Friday came the revelation the company's operating agreement for the facility has yet to be validated - two weeks after city leaders first unveiled what they said was a signed agreement.

Still, some Hardin leaders said the deal to turn over the 464-bed jail remained on track.

The agreement with American Police Force has been heavily promoted by members of the city's economic development branch, the Two Rivers Authority. Authority Vice President Albert Peterson on Friday repeated his claim to be "100 percent" confident in the company.

The lead public figure for American Police Force, Michael Hilton, said more than 200 employees would be sought for the jail and a proposed military and law enforcement training center.

That would be a significant boost to Hardin, a struggling town of 3,500 located about 45 miles east of Billings. An earlier announcement that a job fair would be held during the last week never came to fruition.

The bonds used to pay for the jail have been in default since May, 2008.

Hilton also said he planned a helicopter tour of the region in coming days to look at real estate for a planned tactical military training ground. He said 5,000 to 10,000 acres were needed to complement the training center, a $17 million project.

But the company's flashy arrival this week stirred new questions. The logo on the black Mercedes SUVs said "City of Hardin Police Department."

Yet the city has not had a police force of its own for 30 years.

"Pretty looking police car, ain't it?" Hardin resident Leroy Frickle, 67, said as he eyed one of the vehicles parked in front of a bed and breakfast where Hilton and other company representatives were staying. "The things you hear about this American Police, I don't know what to think."

Hilton said the vehicles would be handed over to the city if it forms a police force of its own. The city is now under the jurisdiction of the Big Horn County Sheriff's Office.

"This helps, but it doesn't answer everything until the contract is signed," Adams said. "Talk is cheap."

Hilton said the company's arrival in Hardin would help allay such concerns. And he promised that on Feb. 1, 2010, Hardin would receive its first check under a deal said to be worth more than $2.6 million annually.

Little has been revealed to date about American Police Force. The company was incorporated in California in March, soon after Hardin's empty jail gained notoriety after city leaders suggested it could be used for the Guantanamo Bay terrorism detainees.

Members of Montana's congressional delegation say they have been closely monitoring the events in Hardin, but the city has largely been going it alone.

In the two years since the jail was built, city leaders have clashed repeatedly with the administration of Gov. Brian Schweitzer, who opposed efforts to bring in out-of-state prisoners.

After then-Attorney General Mike McGrath issued a 2007 opinion saying prisoners from other states were prohibited, Hardin successfully sued the state.

Despite the city's contention that the state has continued to foil its efforts to find prisoners, Montana Department of Corrections spokesman Bob Anez said his agency is no longer involved. "That's water under the bridge," Anez said.

On Friday, American Police Force announced its first local hire: a reporter for the Billings Gazette, Becky Shay, who has covered events surrounding the jail since its construction. She will be the company's spokeswoman for $60,000 a year.

Shay said she intended to bring new transparency to the process, but declined to directly answer the first question posed to her: Where is American Police Force getting the money to operate the jail and build the training center?

"I know enough about where the money is coming from to be confident signing on with them," she said.

Gazette Editor Steve Prosinski said he was first informed about Shay's decision to leave the paper on Friday. "We weren't aware that she was talking with them about employment," he said.

Hilton said he also had a job discussion with Kerri Smith, wife of Two Rivers Authority Executive Director Greg Smith, who helped craft the deal to bring American Police Force to Hardin. Greg Smith was placed on unpaid leave two weeks ago for reasons that have not been explained.

Kerri Smith is one of two finalists in the city's mayoral race. Hilton said he asked her to call him about possible employment if she did not win the race.

Kerri Smith could not be reached immediately for comment. A message was left by The Associated Press at a theater owned by the Smith family. Her home number is unlisted.