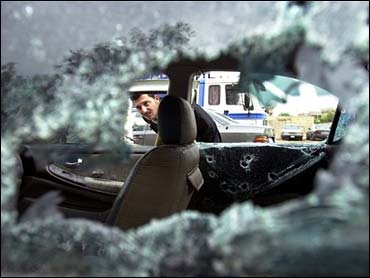 Gunmen stormed the compound of a Saudi company in a fashionable Baghdad neighborhood Monday, seizing an American, a Nepalese and four Iraqis after a gunbattle in which a guard and one of the assailants were killed, police said.

The American, who was not identified, was the 12th U.S. citizen reported kidnapped or missing in Iraq. He was grabbed about 500 yards from the house where two Americans and a Briton were kidnapped last month. All three were beheaded.

The dramatic abduction occurred two days after the decapitated body of Japanese backpacker Shosei Koda was found in western Baghdad. The al Qaeda-affiliated movement of Abu Musab al-Zarqawi claimed responsibility for his kidnapping.

But Prime Minister Ayad Allawi came under new pressure, this time from Iraq's president, to forego on all-out American assault on Fallujah and other Sunni insurgent strongholds. U.S. and Iraqi officials hope to curb the insurgency in time for national elections in January.