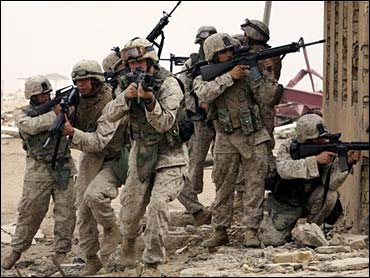 An American and three other foreigners were kidnapped Monday from their office in western Baghdad, U.S. and Iraqi officials said. An Iraqi guard and one attacker were killed in a gunfight during the abduction, a police lieutenant said.

Interior Ministry spokesman Col. Adnan Abdul-Rahman said the other kidnap victims included an Asian and two Arabs but he did not know their nationalities. U.S. Embassy spokesman Bob Callahan confirmed that the fourth victim was an American.

Abdul-Rahman said the victims were believed to be working for a Saudi company but he had no further details. U.S. troops sealed off the street in the Mutanabi area of the upscale Mansour district.

Police Lt. Ali Hussein said the attack occurred about 5:30 p.m. during the iftar meal when Muslims break their daylong fast in Ramadan. He said the gunmen attacked with semiautomatic rifles, triggering a gunbattle with guards that resulted in the deaths.

Twelve Americans have been kidnapped or are missing in Iraq. At least three of them have been killed — all beheaded in abductions claimed by an al Qaeda-linked group led by Jordanian militant Abu Musab al-Zarqawi.

In September, militants kidnapped two Americans and a Briton from their home in Mansour. All three were later beheaded.