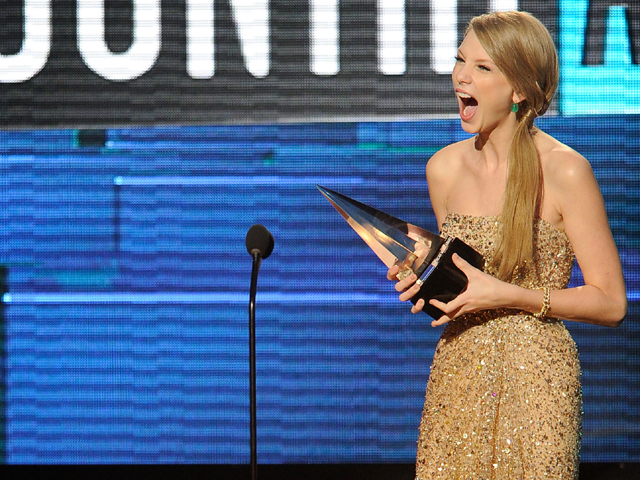 The 21-year-old pop-country star won artist of the year, nabbing the top trophy for the second time in her young career. She also won the awards for favorite country album and favorite country female artist.

"This is so crazy!" the country superstar said after beat such contenders as Adele, Lady Gaga and Katy Perry to capture all three awards that she was nominated for at Sunday's ceremony.

Nicki Minaj, who kicked off the fan-favorite ceremony by sporting a pair of speakers on her much-talked about posterior, picked up two awards - she was later honored as favorite rap/hip-hop artist, besting a group that included mentor Lil Wayne, and won favorite rap/hip-hop album for "Pink Friday."

"There's so much love in this room," the pink-loving hip-hop diva beamed. She also thanked Swift, a big fan of her "Super Bass" hit.

Adele had been the leading nominee with four awards, but didn't have much of a presence at the show: She was absent from the ceremony because she is recovering from recent throat surgery. She tied Swift with three awards: favorite pop/rock female artist, adult contemporary artist and pop/rock album for her chart-topping "21."

The ceremony inside the Nokia Theatre in an unusually rainy Los Angeles was dripping with more musical performances than winners.

Justin Bieber got in the holiday spirit with "Under the Mistletoe," and Kelly Clarkson, wearing a glittery red gown with her hair swept to the side, delivered a swinging rendition of her "Mr. Know It All" as back-up dancers dressed as 1930s-era photographers snapped the original "American Idol" champion.

Jennifer Lopez and Marc Anthony shared custody of rapper Pitbull, who joined the former couple in a pair of separate performances. Lopez performed essentially a live version of a car commercial starring the "Idol" judge set to "Papi" before launching into her hit "On the Floor." Pitbull later returned to the stage and joined Anthony for "Rain Over Me."

"It's been up and down and just exciting and overwhelming and so many things," Lopez reflected on the past year after beating out her ex for the favorite Latin music artist award.

There were several other collaborations, too. Christina Aguilera joined Maroon 5 for their duet "Moves Like Jagger," and then Maroon 5 lead singer Adam Levine teamed with Gym Class Heroes for their hit "Stereo Hearts."

The Band Perry crooned an emotional "If I Die Young," a pink-haired Katy Perry accompanied herself on guitar for "The One That Got Away" and a platinum-blonde Chris Brown simply sang "All Back" before being joined by a troop of helmet-clad back-up dancers for a flashy interpretation of "Say It With Me."

Perry also received an achievement award for getting five No. 1 singles from her album "Teenage Dream." She's the first female artist to reach that milestone from a single album.

The ceremony closed with a performance of LMFAO's "Party Rock Anthem" that included Justin Bieber in animal print pants and David Hasselhoff stripping down to smiley-face underwear.