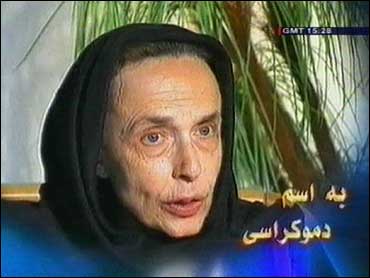 An Iranian-American academic who was held in a notoriously harsh Tehran prison before being released and allowed to leave Iran said Monday she was "elated" to be heading home after eight months of detention.

Haleh Esfandiari flew to Austria late Sunday to reunite with her family one day after Iranian authorities returned her passport. Family and colleagues said they felt great relief at the end of a crisis that caused sharp new tensions between Iran and the United States.

"After a long and difficult ordeal, I am elated to be on my way back to my home and my family. These last eight months, that included 105 days in solitary confinement in Evin Prison, have not been easy," Esfandiari said in a statement issued by her employer, the Woodrow Wilson International Center for Scholars.

"But I wish to put this episode behind me and to look to the future, not to the past," she said.

Esfandiari, 67, who was released on bail earlier in August, picked up her passport and flew from Iran to Austria, where her sister lives, said her daughter, Haleh Bakhash. She was reunited with her husband and plans to spend about a week there before heading home to the United States, Bakhash said.

"She had some indication that she would get her passport back but she didn't know when. It was a complete surprise to all of us, and a relief," Bakhash told The Associated Press from her home in Washington.

The unexpected development came after President Mahmoud Ahmadinejad said last week that his government was not opposed to Esfandiari's departure, but the Iranian judiciary would have to sort out the issue.

The Iranian Intelligence Ministry has accused her and her Washington-based foundation of trying to set up networks of Iranians with the ultimate goal of creating a "soft revolution" in Iran. Esfandiari's family and the Wilson Center, where she is head of the Middle East program, have denied the allegations against her.

"I am elated to get the news that Haleh can now leave Iran and is returning to the United States," said Lee Hamilton, head of the Wilson Center and a former congressman.

Esfandiari was one of a handful of Iranian-Americans detained or facing security-related charges here. There was no new information regarding the three detained other dual nationals, but their arrests have sharply added to escalating tensions between the United States and Iran.

Iranian judiciary officials have not provided answers on Esfandiari's legal status since her release. It is unclear if she still has to stand trial or return to Iran to appear in court.

"We don't know where any of that stands. We know she is free to go and got her passport back," Bakhash said.

Her lawyer in Iran, Abdol Fattah Soltani, told AP that Esfandiari got her passport and left Iran, but he had no more details. Hamilton said Esfandiari was not able to speak about her incarceration at this time.

Last month, another lawyer for Esfandiari, Nobel Peace Prize laureate Shirin Ebadi, said there was no legal obstacle standing in the way of her client rejoining her family back in the U.S., but she has to return to Iran to stand trial over charges of endangering national security.

Esfandiari was released on bail Aug. 21 from Evin prison, where she was held since May. Her 93-year-old mother used the deed to her Tehran apartment to post bail.

It was uncertain what prompted her release, but Hamilton has said he received a written response from the office of Supreme Leader Ayatollah Ali Khamenei after sending him a letter, appealing for her freedom.

Khamenei replied that he was pleased Hamilton had expressed a desire for peace and justice and said he had given instructions to "deal with this issue," according to Hamilton.

Esfandiari was first detained Dec. 30 after three masked men holding knives threatened to kill her on her way to Tehran's airport to fly back to the U.S. from visiting her mother, the Wilson Center has said.

In January, her passport was taken away. For weeks, she was interrogated by authorities for up to eight hours a day about the activities of the Center's Middle East Program, the center said.

She was charged and sent to prison in May. For months, her only contact with her family were brief telephone calls to her mother, in which she said she was under stress. Since her release on bail, Esfandiari is believed to have stayed at her mother's home.

Iran has charged three other Iranian-Americans with security-related offenses: Parnaz Azima, a journalist for U.S.-funded Radio Farda; Kian Tajbakhsh, an urban planning consultant with the Soros Foundation's Open Society Institute; and Ali Shakeri, a founding board member of the Center for Citizen Peacebuilding at the University of California, Irvine.

Shakeri and Tajbakhsh are in prison; Azima is free but barred from leaving Iran.

In July, Iran's state TV broadcast a video in which Esfandiari said a network of foreign activists was trying to destabilize Iran and bring about "essential" social change. Tajbakhsh, who also featured in the video, said that his organization tried to create a "gap between the government and the nation."

The Wilson Center and the Open Society Institute criticized the Iranian government for the broadcast and dismissed the statements as "coerced."