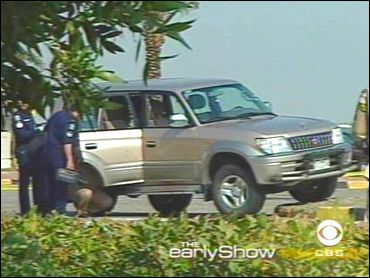 A gunman ambushed two Americans driving near a U.S. military base Tuesday in Kuwait, killing one and wounding another in what U.S. officials branded a terror attack.

Both victims were civilian contractors working for the U.S. military based in Kuwait, and the statement said the second man was critically wounded.

The shooting was the first assault on U.S. civilians in Kuwait and the third on Americans since October in the oil-rich emirate, where pro-American sentiment is usually strong and where thousands of U.S. troops are assembling for a possible war on Iraq.

"We condemn this terrorist incident, which has tragically cost the life of an innocent American citizen," U.S. Ambassador to Kuwait Richard Jones said in the statement.

U.S. Embassy spokesman John Moran said the two American men were inside their vehicle on Highway 85 north of Kuwait City near Camp Doha, a large military installation serving as a base for 17,000 troops in the oil-rich Gulf nation.

Michael Pouliot, from San Diego, died almost instantly, reports CBS News Correspondent Byron Pitts. Poulio, 46, was an employee of a software development company, Tapestry Solutions, under contract to the Defense Department. Poulio was in the passenger side of the vehicle which was hit at least 20 times.

Caraway underwent surgery Tuesday afternoon at Kuwait City's Al-Razi hospital. A hospital staff member who spoke on condition of anonymity said the injuries were serious but not life-threatening.

He said all of the injuries were to the right side of the body, including fractures in his arm and thigh. He also has two bullets in the chest — one near the surface and the other deeper. A heart surgeon was called to participate in the surgery, he said.

Back home in California, colleagues were stunned.

"Everyone is saddened by this tragedy," co-worker Chris Wahl told CBS.

Another Kuwaiti security official, speaking on condition of anonymity, concurred with the American assessment of the shooting as a terrorist act.

Sabah expressed "sincere regret" and Kuwait's "strong condemnation of such criminal acts that target the historic relations and strong ties between the two friendly nations," the agency reported.

The attack occurred Tuesday morning at a stoplight at the intersection of Highway 85 and Abu Dhabi Road, along the edge of a built-up neighborhood with a McDonald's and other businesses. The road leads to Camp Doha, about 5 kilometers (3 miles) away, and is lined with trees and bushes with open desert behind.

No group claimed responsibility for the attack. U.S. and Kuwaiti officials said they believed a single gunman fired a Kalashnikov assault rifle at the vehicle. The attacker then fled.

The area was cordoned off with yellow crime tape. The bullet-riddled four-wheel-drive Toyota was loaded on to a flat bed truck and taken away.

Kuwaiti police and U.S. military police as well as black-clad Interior Ministry investigators wearing rubber gloves were all at the scene. The pavement was littered with broken glass.

"We have full confidence that the Kuwaiti authorities will pursue the investigation of this incident vigorously and professionally," Jones said in the statement.

In Washington, the White House said Americans were working with Kuwaiti investigators to determine who was behind the attack, which underscored the hostility some feel toward Americans even in Muslim nations considered sympathetic to the United States.

"The president's heart goes out to the families affected by this attack," spokesman Ari Fleischer said. "It's a reminder of the dangers and risks servicemen and women face every day."

Pouliot is survived by his wife and daughters, ages 12 and 14, a Tapestry spokesman said.

"We are stunned by this senseless act of violence which has taken a great man and friend from our family," said Mark Young, Tapestry vice president.

Kuwait, critical to any U.S. invasion of Iraq because of its location at Iraq's southern border, is grateful for the U.S.-led coalition that drove Iraqi invaders out of their country in the 1991 Gulf War. The pro-American feeling of most Kuwaitis makes them something of an anomaly in the Muslim world, where anti-U.S. sentiment and opposition to war in Iraq are running high.

Still, the support isn't universal and Americans have come under attack in Kuwait in recent months. About 8,000 American civilians live in Kuwait.

A U.S. Marine was killed and a second was wounded Oct. 8 when two Kuwaiti Muslim extremists opened fire on a group of Marines taking a break from training. The attackers were killed by other Marines. On Nov. 21, a Kuwaiti policeman shot and seriously injured two U.S. soldiers after stopping their car on a highway.

In an audiotape that surfaced in November, a voice U.S. officials believe was bin Laden's praised the attack on the Marines as the work of "zealous sons of Islam in defense of their religion."

Kuwaiti Parliament Speaker Jassem al-Kharafi told reporters that Tuesday's shooting was "an act of an individual that doesn't represent the opinion of the Kuwaiti people."

He added: "There have been similar incidents in the past and there might be more in the future by saboteurs, intruders and ignorant people." Al-Kharafi said such shootings could take place anywhere and "we are not a country of angels."

Kuwait is the only country in the Gulf where large numbers of American ground troops are assembling and engaged in training for desert warfare.

Tens of thousands more U.S. and British troops are expected in Kuwait in the run-up to a possible war against Iraq — which U.S. President George W. Bush says will be necessary unless Iraqi President Saddam Hussein rids his country of all weapons of mass destruction.

The United States announced Monday that it is sending a specially tailored force of about 37,000 soldiers, spearheaded by the Texas-based 4th Infantry Division — the largest ground force identified so far among the nearly 100,000 U.S. troops included in deployment.

"This is very unfortunate and we are sending our condolences to the American Administration and his (the victim's) family," Prince Saud said.

Although Tuesday's attack was the first on civilians, the men worked for the military, and in one previous attack, soldiers were driving a civilian vehicle.

In response, the U.S. Embassy was reviewing security. "We're urging Americans to be alert to their surroundings and to continually assess their security," an embassy official said.

Said American Company Employee Laurence Peters, "The people today weren't in military uniforms. They were standing by doing their normal job and they were gunned down."

They were gunned down in a country that welcomes westerners, but can no longer guarantee their safety.