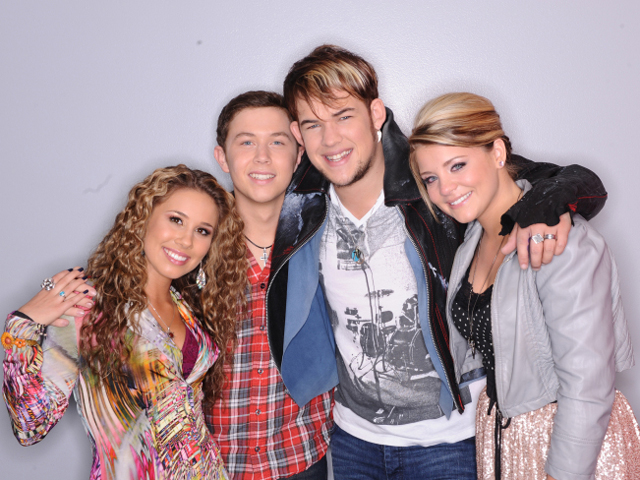 Some might call it shameless pandering. Some might be right. Judge Randy Jackson was actually a member of Journey.

Durbin shamelessly pandered to that fact by mentioning it before he even sang a note. The question is, did he add anything to the original? He was fun, enjoyable, entertaining. New, on the other hand, is harder.

"You did it right, man," said Steven Tyler. Jennifer Lopez hung on his vibrato.

Jackson described it as "the highest degree of difficulty...and you did it."

Perhaps Jackson has a sense of irony. Perhaps, though, the most striking part of this performance was the footage of Durbin coming in for his original rehearsal what seems like years ago. He looked so much younger then.

Haley Reinhart, who last week was pushed into an unknown Lady Gaga song, this week chose Michael Jackson's "Earth Song". Did she think that she could steal a few of Scotty McCreery's little girls in pink fluffy bedrooms' hearts with some green credentials?

It was a pity that we weren't shown any footage of Jimmy Iovine mentoring her before the show. Did Jimmy approve? Did Jimmy quit on her?

In truth, Reinhart tried to give the song rasp and soul and largely succeeded. We also got a lovely shot of her (perhaps) boyfriend Casey Abrams applauding in the audience.

The judges, however, turned ugly.

"James comes out and he sets the bar. You gotta think about that when you choose the songs," said Lopez, presumably feeling that Reinhart hadn't inspired the audience.

Jackson said it confused him as to who she was as an artist. "The song needed you to deliver it. This was Michael Jackson's pinnacle," he said, offering a strange perspective on pinnacles.

Reinhart fought back. "I just felt it," she said.

"My opinion was I didn't like it," insisted Jackson.

This was getting pleasantly unpleasant.

"They're both wrong," interjected bestselling author Tyler. He inadvertently said the most important thing: "It wasn't a hit song."

Advanced Youth Karaoke needs hit songs that the lady voters can recognize and hum along to while they fantasize.

At least, you couldn't accuse Reinhart of pandering. Scotty McCreery, on the other hand, had no qualms at all.

The song was "Where Were You When the World Stopped Turning?," an Alan Jackson song that was all about, indeed, 9/11. Just coincidentally, a little over a week after Osama Bin Laden breathed his last.

"I'm just a singer of simple songs," sang McCreery. Here was a song that not only offered nationhood, but also slung in some Jesus.

The thing is, it's not a terribly good song. It's a very dull melody. No one will be humming it tomorrow.

"You're ready for superstardom and I hope you make it," said Jackson.

The real country talent, Lauren Alaina, went for a little Martina McBride. She wanted to show solidarity with those in her home state who had suffered natural disaster.

Alaina sang of God too. But her "Anyway" was truly moving, as opposed to merely manipulative. Sixteen-year-olds understand disasters. McCreery's grasp of politics is, one might guess, imperfect, but his pitch is on target.

Oh, and Alaina can sing. She can really sing, with subtleties that others can only imagine.

"You did it again. You broke my heart," said Tyler. "You deliver a song like a blue plate special." He also loved the buckles on her shoes.

Jackson, perhaps exhausted by having already offered severe criticisms and trying to find new phrases, declared that she was, yes, can you take it, are you ready, please sit down: "In it to win it."

For their second songs, the contestants had to choose songs from Lieber and Stoller's catalog. Accompanying them in the mentor's chair was Lady Gaga. Yes, the Lady Gaga-- she who has made everyone's gym experience a little more enjoyable over the last couple of years.

Strangely, the producers changed the running order. Haley Reinhart was up first, and she was clearly angry at what she saw as the arrant guff that had been offered her by Jackson and Lopez.

"How do you feel about going psycho?" asked Gaga. I imagine that, by the time of performance, Reinhart felt pretty good about that.

The song was "I Who Have Nothing." Reinhart may not have everything. But she has a lot and she laid it out for Jackson to pick up off the floor.

Her last note had several notes wrapped in it, after which the judges stood to applause. Was it utterly, incredible and amazing? Not quite. But it was still very, very good.

Look what you're capable of," said Lopez, as if trying to justify her previous nonsense.

Jackson said it was one of her best vocals ever, before saying she was "in it, etc etc"

"You have 'Reinharted' yourself into the middle of next week," said Tyler, a little optimistically.

Host Ryan Seacrest encouraged Reinhart to hug Jackson. It was as if a rock star was being asked to hug a paparazzo.

Scotty McCreery and Lady Gaga-- surely a marriage made in a timeless purgatory where oxygen is replaced by boiling oil. Gaga tried to explain to McCreery to stay on the mike. She tried to explain that it was like a girl wanting him to put his tongue down her throat. McCreery feigned virginity.

"He's a little more conservative than I might have imagined," said Gaga. McCreery kissed his crucifix.

When he performed, he moved his eyebrows a lot. He pulled a lot of faces that he might have seen in cartoons. Oh, and he bulged his eyes at the end. Did he sing? Apparently. The song was "Young Blood." There was nothing young about it.

"We just saw both sides of a Scotty concert," said Jackson. One can only hope the tickets are free.

As if to emphasize that country has another, more inspired, side to it, Lauren Alaina offered "Trouble." It includes the lyric "evil". Gosh. Alaina has a lot of hair and it managed to flow as she moved, as she showed energy, life and just a little evil raunch.

Oh, and perhaps it's not worth pointing out in "America Idol", but she can sing.

"There's the character that came out again," said Tyler.

"Don't be afraid to get into your body a little bit more," said Gaga. She came behind him, groped his hips and made them move. That's what people found so upsetting about Elvis, she said.

Durbin did his best to give the song some rock that weighed a ton. He gave it every possible performance-related element, pausing at the end to deliver every last syllable.

"You know what that showed me--that you can sing anything," said Lopez.

"You're peaking at the right time," said Jackson.

So who is peaking? Who is truly peaking? McCreery, with his coy, manufactured sweetness, is surely peaking in the bedrooms in which girls still keep their pajamas inside stuffed elephants.

Given the voting skews by sex, one can only conclude that it will be a girl being shown the door Thursday. That's just evil.