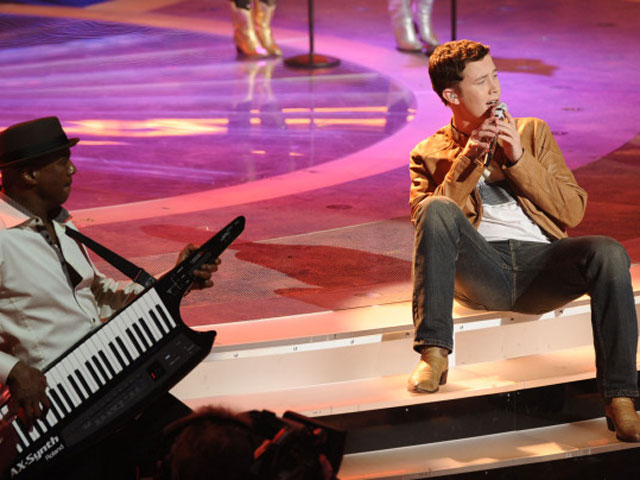 (CBS) Just how 21st century are the remaining seven contestants on "American Idol"? Are they really contemporary, or are they merely nice young kids who work hard at resembling someone who's already been?

For some strange reason (filling time) the show opened with all those (girls) who had so far been rejected on the show. Suddenly, they were joined by Paul McDonald. They all sang Pink's "So What?" And, indeed, that's how it was. Discordant, cliched and quite thoroughly whatever?

Then, finally, we got to the competition.

Scotty McCreery explained that it was wonderful to hold your microphone like a flute. Apparently, it adds character. Mentor Jimmy Iovine was worried that the audience would become complacent. Truthfully, he was worried that McCreery was a one-trick pony who was ready for the slaughterhouse.

McCreery offered a performance that would not have been out of place in 1958. Yes, he had some brass players adorning the stage. But his version of LeAnn Rimes' "Swingin'" was another dessert of crème brulee in yet another steak house.

The judges suddenly woke up from their sucky-uppy slumber. "I guess that's your version of a Rolling Stones tune," said Steven Tyler, removing just a touch of barb from his fragrant mouth. "I would just love it if you boot-scooted a little more." Oh, Steven, at least this week McCreery sang in tune.

And Jennifer Lopez - yes, she of the unctuous fawning - declared: "It's time to pull out the big guns...you had a decade of country music to choose from...and we were expecting more from Scotty." This was the equivalent of a Manolo in the bottom, a freshly-manicured finger down the face.

It was left to Randy Jackson to offer some simple, truthful vernacular. He called it "boring".

Wearing some castoff clothes from a video game shoot, Durbin offered much of the drama of Adam Lambert (though with less makeup). He threw in some military drummers. He also threw in highest, heaviest metal sounds that have ever been heard on "Idol." He also offered screaming stagecraft so powerful that many screeched for an encore.

You stay out of my closet," said Tyler. "Mad Max meets Stormtroopers on Melrose." He added that it was very expensive to look that cheap. In the context of "Idol", Durbin is a valuable rarity - someone vaguely relevant.

Haley Reinhart took the very contemporary "Rolling in the Deep," originally created by Adele. It's a song of heartache. It's also a song of soul. Perhaps Reinhart - who has been rumored to be, um, close (though, perhaps, no longer) with Casey Abrams - hasn't quite endured enough pain in her life to transmit anguish. She tried, though. She really tried. But she finished a little out of breath, straining for pain. The judges reverted to nice, which seemed more an expression of neutrality than anything else.

Jacob Lusk is, according to his fellow contestants, the biggest diva. Many will be shocked to hear that. He chose "Dance With My Father," a painful Luther Vandross song. Lusk lost his father when he was young and, at the beginning of his performance, he struggled with the track in his ear, and also with his emotions. By the end, however, he was in full, dramatically divaesque control. The contrast with Reinhart was stark. Where Reinhart's pain was imagined, Lusk's was real.

Though Tyler called him "Luther Lusk," Jackson thought Lusk was too controlled. "If you're here next week, go for it," said Jackson. That "if" represented true criticism. Enjoy it. Delight in it. Bathe in it. The judges had finally decided to say what they really thought. Well, at least a little.

What could Casey Abrams offer that was contemporary? Maroon 5? Really? Maroon 5? Well, at least it's this century. The song was "Harder to Breathe," which, no doubt, reminded Abrams of the moment when the judges tossed their one save in his direction and he fell gasping to the floor.

He brought his guitar. He also brought just enough maniacal facial gestures and posturing to take what is a smooth, bland song and give it fresh, rough, rock edges. At the very end, he allowed his lips to touch Lopez' blissfully smooth face. Suddenly, she was finding it hard to breathe.

"Casey got soft lips," said Lopez. "You did what I've been trying to do for four months," explained a jealous Tyler. In his excitement, Tyler said that Abrams has pissed off millions of people because "you're so f'ing good."

Shock, horror ensued. When "Idol" says it's contemporary, that's not supposed to include, well, naughty words.

Stefano Langone has been close to departure throughout the final 12. He chose Ne-Yo's "Closer." It all seemed as if The Situation had been given hurried singing lessons and then wandered tipsily onto the stage of his local nightclub. This was painful visually, painful vocally and about as contemporary as Johnny Mathis, but not half as good as Johnny Mathis.

Finally, we had 16-year-old Lauren Alaina who chose Sarah Evans' "Born to Fly." Iovine wanted her not to hold back. One can only hope that those who love country only have enough energy to vote for one of the two countrified performers left. Though this wasn't Alaina's best performance, it still offered far more energy, vocal range and sheer fun than anything offered by McCreery.

Tyler played nice, but wanted her to do some Alison Krauss or Faith Hill. Lopez believed that Alaina was still too controlled and told her to practice singing big in front of a mirror at home.

And what could be more 21st century that staring at yourself in the mirror and practicing being wonderful?