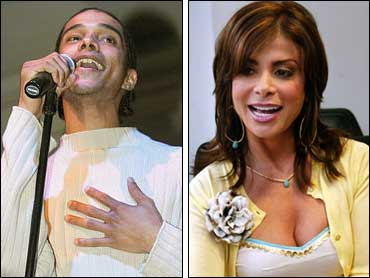 Taking a page from Washington, the producers of "American Idol" and Fox TV hired an independent counsel to determine whether judge Paula Abdul had an affair with a contestant on the hit talent show.

"Any allegations against this show we take quite seriously," Fox Entertainment President Peter Liguori said Thursday, calling the competition's credibility "extraordinarily important to us."

Liguori refused to say if Fox and producers Fremantle Media and 19 Television would fire Abdul if the claims by Corey Clark, an unsuccessful contestant on season two, were found to be true.

The probe's results are due soon and will be made public, Liguori said in an appearance before the Television Critics Association.

Abdul, Clark and "corroborating witnesses" have been questioned, he said.

The series, the most-watched on television and a key part of Fox's ratings success, was hit by a tabloid story and then an ABC report detailing Clark's allegations against Abdul. He claimed she advised him on his singing and appearance during their alleged relationship.

In an apparent display of network support, Abdul has been included in another Fox talent contest airing this summer, "So You Think You Can Dance." And while Liguori was before the critics' group, she was filling in as an anchor on a local Fox news show.

A call to her publicist seeking comment was not immediately returned Thursday. In the past, Abdul has denied the allegations.

Although auditions for the fifth season are looming in August, Liguori said the investigation would not be rushed despite uncertainty over Abdul's continued participation in the show.

He noted that not all the judges have been on hand for previous auditions. "That could be a potential option," he said, suggesting that Abdul might be left out in the early going.

Production pressures will not affect the investigation, he said.

"I'd rather be able to come to a conclusion with the independent counsel and our production partners and come out with a definitive answer and conclusion for you," he told the critics' group, "rather than race to have a conclusion before production starts."

Observers have been divided about whether the allegations, if proved, could damage the show's credibility.

The series' rules about fraternization focus on whether a judge or producer affects the show's outcome, Liguori noted. Ultimately, he said, "it's America that decides who moves forward," a reference to viewer voting.

He declined to identify the independent counsel, a term familiar from Washington investigations including Whitewater during the Clinton administration and the current probe of Bush administration figures in the leak of a CIA officer's name.

The "American Idol" investigator is experienced in "this type of inquiry" and unconnected to any entity involved with the show, he said, offering a few details.

Asked why he wasn't being as forthcoming as CBS News was during its investigation of a now-discredited story that questioned President Bush's National Guard service, the Fox executive drew a sharp line between the two.

"News talks about true life-and-death situations for citizens, and we're talking about a piece of entertainment here," Liguori said. "With all that being said, we're clearly not making light of the allegations."

Liguori was forced to defend Abdul's general performance on the show when one reporter asked if her talent as a judge really contributed, noting her commentary often mimicked fellow judge Randy Jackson.

"Look, the audience loves Paula. She continues to get support, she continues to light up our online site, our message board," the Fox executive said.

Clark was dumped from "American Idol" in 2003 because he failed to reveal a prior arrest. Earlier this month, the Sacramento County district attorney's office decided not to press criminal charges against Corey for a hotel food fight that got out of control.