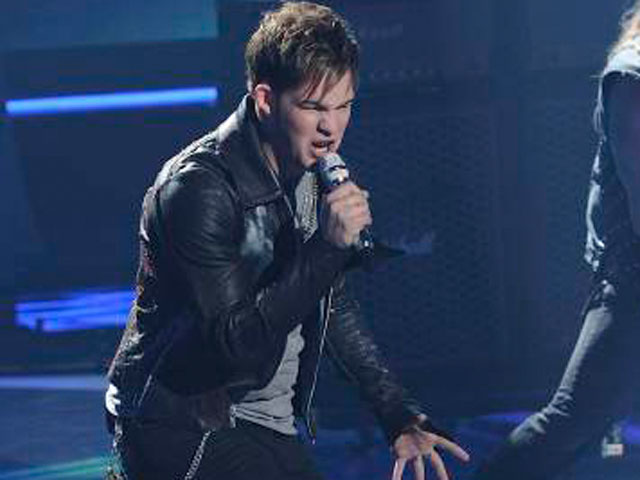 (CBS) Would they succumb to Pia pressure?

After the shocking, stunning, perhaps entirely predictable ousting of Pia Toscano, the remaining "American Idol" contestants last night had to deliver music from the movies. This strategy meant they picked a song they liked and hoped it had appeared for a few seconds on a soundtrack.

Toscano reportedly already has a recording contract (for what that's worth these days). How many of the remaining eight would ever have the same?

First up was Paul McDonald, dressed in some castoff from a local arboretum, meandered around the stage like the progeny of Mick Jagger and a peculiar stick insect, as he sang Bob Seger's "Old Time Rock and Roll." The song was from the movie "Risky Business." This was definitely not risky, and it was utterly old time.

Steven Tyler wondered who McDonald's lady sax player was and offered what perhaps passes on "Idol" for subtle criticism: "I liked it."

Producer and "Idol" mentor Jimmy Iovine told Lauren Alaina that she was a much better singer than Miley Cyrus. Some might imagine that this is like being told you are a better dancer than Sugar Ray Leonard. He also told her that she had to persuade all of Toscano's voters (of whom there were less than some might have imagined).

Alaina performed Miley Cyrus' "The Climb" creditably, and received the vacuous gushing praise which has become the staple vocal performance of the judges. Lopez told her that she didn't need anyone else's votes. How nice. Tyler, on the other hand, said that she moved him beyond tears, which some might interpret as Alaina failing to move him to tears.

Despite having one of the better voices remaining, Stefano Langone needs to go from boy to man. He needs to connect with the audience. However, for one person to deliver a group ensemble like "End of the Road" by Boys II Men, he would have to dominate the stage. Sadly, though his vocals were good, his stage presence still resembles that of the recalcitrant son of a local merchant.

Scotty McCreery bizarrely claimed he was going back to his country roots. As if he had ever left.

At first, he was going to perform Harry Nilssons' "Everybody's Talkin." However, this is a song from "Midnight Cowboy" - a movie about a hustler. Far too contentious, indeed. So McCreery plumped for a George Strait ditty from a movie starring, well, George Strait. The movie was not a success, but the soundtrack was Strait's most popular album ever. So here was McCreery singing "Cross My Heart." This was a beige, bland performance with at least half a flat note at the end, which meant he received universally oily praise from the judges.

"Everybody wants us to be tough with you guys," said Lopez. "But the trouble is that you're all so damned good." The truth is that country music is so damned good. However, this parody of a performance from McCreery deserves to send him to the bottom three.

Casey Abrams has trimmed his beard, but he has not trimmed his fondness for risk. He performed Nat King Cole's "Nature Boy" from the movie "Untamed Heart." Iovine wanted him to sing Phil Collins' "In the Air Tonight," for purely commercial reasons. Abrams and his standup bass went their own way. It's a way that might send Abrams out of the competition. Admirably, he wanted to establish his credentials as a jazzy artist.

The judges stood to applaud, but the question remains as to whether Abrams sang well enough. It might seem on oddly obvious question. But, for some, he might have sacrificed notes for too many arch grunts and screeches. Naturally, the judges loved it, said that he was a genius and that they were proud of him. Oh, and they hoped that America got it.

Perhaps Abrams will turn out to have been grateful for Haley Reinhart's performance of Blondie's "Call Me," which some might not remember from "American Gigolo." Reinhart sported thigh-high purple boots, but the vocals of a high-schooler performing at a party for her class, after an illicit shot of tequila. All too often, flat notes pierced the air like backfiring motorbikes.

Here's how mediocre this was: The judges didn't all love it. Jackson produced the hangman's word - karaoke. Lopez was desperate not to criticize because, she said, she didn't want any more girls to go home. Still, she criticized-- on the JDownLo.

Iovine wasn't happy with Jacob Lusk's song choice. So he muscled him into "Bridge Over Troubled Water" from Will Smith's movie "The Pursuit of Happiness." Lusk seemed on the verge of depression. Last week he spent time in the bottom three. Still, he lays layers of whipped cream all over anything he performs. Here, his vibrato almost gave way a couple of times, and somehow, one wanted a bigger finish to the song than Lusk gave it. The judges, however, loved it.

James Durbin fell into a spat with Iovine and fellow mentor, the Black Eyed Peas' will.i.am. He wanted to sing Sammy Hagar's "Heavy Metal" from the astonishing Oscar-contending movie "Heavy Metal." They really didn't like the idea, considering it "hookless." However, Durbin plowed his own metal field. It is possible he might have caused a few watching grannies to increase their medication. It is possible that a few local cemeteries enjoyed the odd mumbled rumblings of a cadaver or two, but his vocal and stage performance were utterly genuine and sung perfectly.

Are there more metal fans in America than country fans? Will voters choose by personality, performance or mere looks? Will another girl drift away on a wave of indifference? How can you not watch the results show?