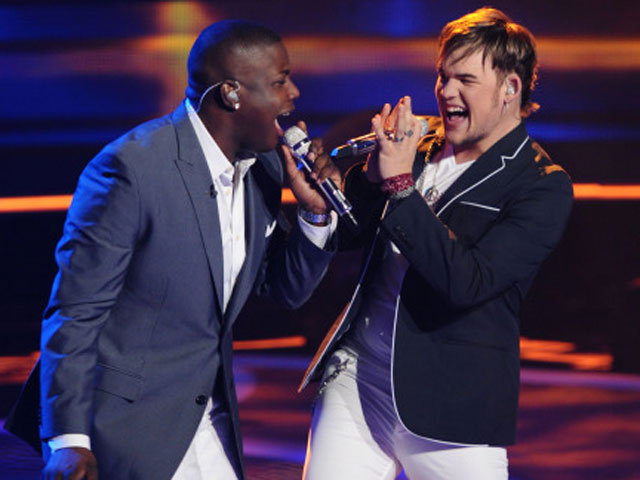 Whose idea could it have possibly been to choose Carole King songs for the six remaining contestants? How many would have even heard of Carole King? Perhaps Casey Abrams, because he's a little weird, but surely none of the other cheery little teens and boys not yet allowed to drink alcohol.

There again, this was an opportunity for the contestants to show just how creative, how original they could be. They even had famed producer Kenneth "Babyface" Edwards to help them prepare along with Jimmy Iovine.

But there was a little extra difficulty. There are only six remaining, but the needs of selling commercial airtime meant the show had to last 90 minutes.

So they had to fill time. With what? Why, with duets.

First we had Jacob Lusk singing alone. "Oh, No, Not My Baby" was his song. Oh, no. He sang it 65 times in rehearsal. Sporting a striking ensemble of purplish check jacket, blue waistcoat, hangover-crashingly bright yellow shirt and even a purple bow tie, Lusk tried to infuse some jazzy soul and curiously hip-hop (well, more hop) dancing. But it all seemed to be a strain, quite understandably.

"It was about time you shook your tail-feathers," said Steven Tyler. "You're here because you're a great singer so hopefully America will give you some votes, so that you can stick around," said Randy Jackson.

Translation: Some hope, Jacob. You're in trouble.

They really set up Lauren Alaina. There she was in rehearsal singing away. She was given "Where You Lead, I Will Follow," a song of which surely no one aged 16 has ever heard, unless they happened to be a fan of "The Gilmore Girls," for which this song is the tune.

And then mentor Iovine brought in Miley Cyrus. Strange, given that, in a previous rehearsal, Iovine had told Alaina that she was a far better singer than Cyrus. Clearly Iovine is a man even the singers fear. Cyrus smiled, gushed and in her extraordinary smoky baritone told Alaina: "Just do it for yourself."

Alaina is the true contemporary country performer in this competition. She wore a dress, but coupled it with cowboy boots, just in case anyone wondered what she stood for. She made sure to couple her singing with performance. She forced her excellent voice to cracking level, as she sang to some apparently arbitrary young man, who turned out to be called Brett.

"I felt you pushing," said Jennifer Lopez, praising Alaina for getting past her innate shyness.

Indeed, but as for the song, Jackson described it as "safe and boring."

Next we had to undergo our first duet: Casey Abrams and Haley Reinhart, the couple rumored to be interested in each other beyond the commercial level. The producers offered a little package that revealed their fearsome chemistry. However, as they sang about the earth moving under their feet, I wonder if there weren't many who thought it was just a subway train.

"Hey, Weird Beard, how much in love with Haley are you?" asked Tyler. Um, what was Abrams supposed to say? 9.5?

Then it was time for Scotty McCreery, the resident young person trying to pretend to be old. Iovine was looking for impact, which is a little like asking a kangaroo to stop hopping and start waltzing.

His song was "You've Got A Friend," which was given most life by James Taylor. McCreery was helped by a cast of a dozen strings. He tried to show a more sensitive and subtle side--even resisting a baritone beginning-- with even a little extreme feeling thrust out along the way. It wasn't entirely clichéd. He reached for an impersonation of the baby John Denver had with Glen Campbell, and he managed to stare lovingly into the camera at every thirteen-year-old girl in possession of a cell phone or computer.

"This was it. I don't think you've ever sung better," said Tyler.

"That's why we couldn't let you get away with what you did last week," said Lopez, patting herself on the back.

McCreery has a friend in Lopez and many others in America. But could you really listen to three McCreery songs in a row? The problem is that he's simply faking it, mimicking Denver, Campbell, George Strait or whoever can get him through the song. He needs a defined self.

Carole King was born to have her songs performed by James Durbin. Can there ever have been a finer, more metallic composer? Durbin chose that classic rocker "Will You Still Love Me Tomorrow?" and decided to create his own version.

Without pomp or marching band, Durbin taught McCreery what it was to make an impact through sheer talent. He let the song breathe. He let it be itself. Then he released his falsetto and it became something Carole King could never have envisaged.

"That's the first song I made out to a girl with," revealed a misty-eyed Tyler. "And no, Randy, I didn't strike out."

For Lopez, this was magical (the performance, that is). She observed that Durbin had delivered with consistent strength every single week. For once, she got it right.

The producers keep pairing Scotty McCreery and Lauren Alaina for duets. Ryan Seacrest was desperate for them to admit romance. McCreery was desperate to assert something pure, sweet and virginal. It's good for his image, he seems to believe.

They sang "Up On The Roof." In truth, it stayed in the kitchen, with a slightly sputtering oven. Alaina hit all her notes and offered all the power. McCreery was, as Lopez observed, "second voice." This was, perhaps, her finest night as a judge.

Casey Abrams decided on a song that was written by King, but made famous(ish) by Blood Sweat and Tears. "HI-de-Ho (That Old Sweet Roll)" is a curious little thing, with scant melody and little opportunity for anything other than screeching, posturing and a smattering of self-indulgence. It had jazz. It had blues. But it surely had little appeal for those little girls and ladies who might bother to vote a thousand times.

"It made my scalp itch," said Tyler, which may or may not be a good thing.

"I'd like you to loosen up a little bit more," said Lopez. What she meant, perhaps, was that Abrams' growls are becoming a little arch and a little tired. He has made it obvious that he has given up on the kind of popularity that Idol attempts to foster, but he's fallen into something that may have lost its entertainment value for everyone but a select few.

"I just saw God," said Tyler. Jackson offered a little worldly perspective: 'I didn't love the beginning..the beginning was a little boring for me."

There's a thing in rugby called the hospital pass. It's when you throw the ball to a teammate knowing that, when he catches it, he will be leveled to unconsciousness by an opponent. And this was what the producers threw to James Durbin and Jacob Lusk.

Their duet of "Something Tells Me I'm Into Something Good" was not something good. Sadly, it was not even something tolerable. Surely everyone could feel their pain.

Some voters likely will ignore whether these fledgling artists have even a modicum of relevance. Instead, the little girls will vote for the ones they have a crush on, while the older voters will choose those whom they would invite into their homes, their cars and their bathrooms.

Carole King night was surely not something that too many will still love tomorrow.