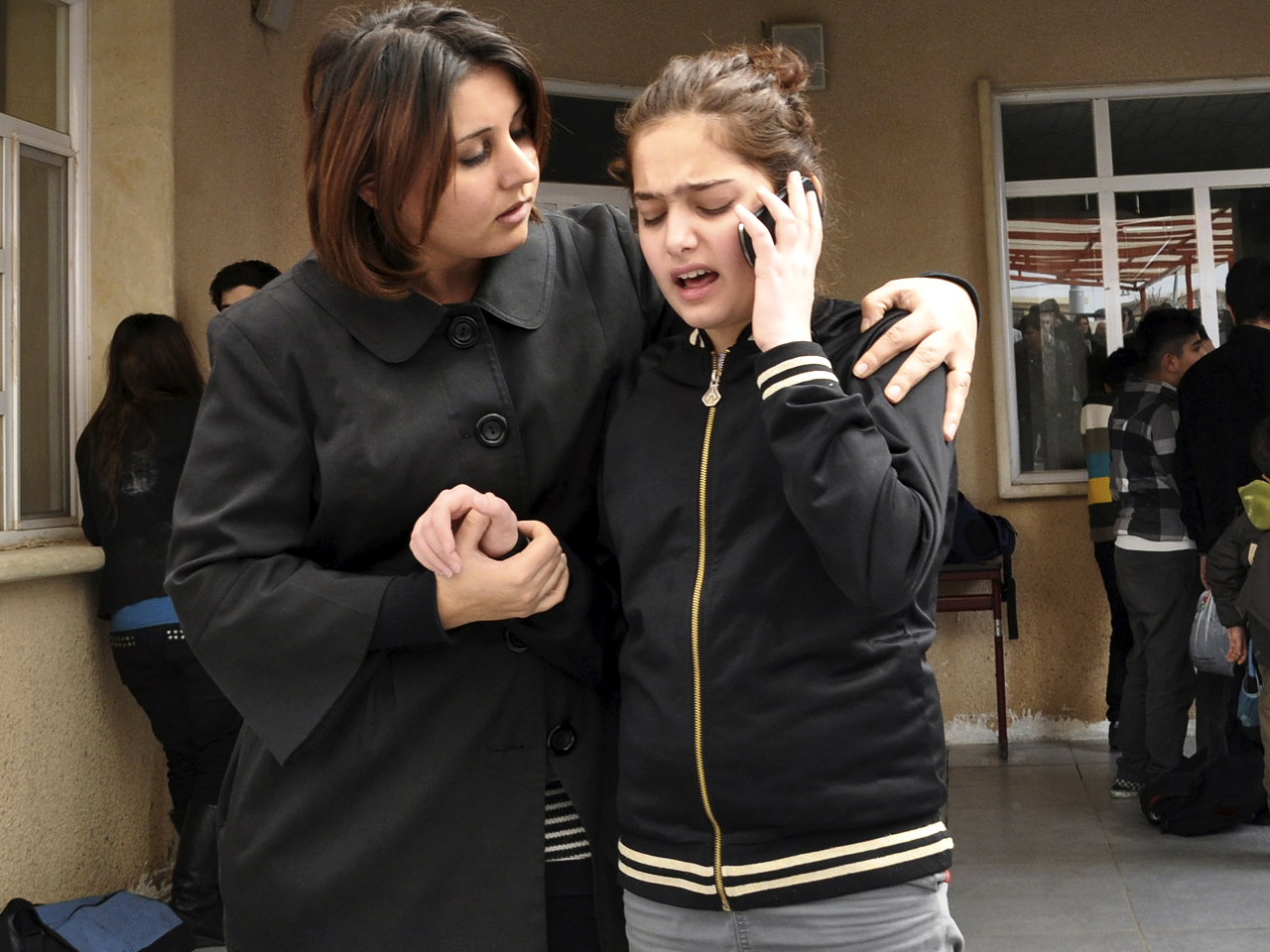 (AP) SULAIMANIYAH, Iraq - The quarrel at a Christian school was at first easily ignored by other students: a disagreement between a classmate and a teacher that could barely be heard. But it quickly escalated into gunfire Thursday in a murder-suicide marking the rare violent death of an American in Iraq's most peaceful region.

Authorities in the Kurdish city of Sulaimaniyah said 18-year-old Biyar Sarwar shot his gym teacher, U.S. citizen Jeremiah Small, before turning the gun on himself at a private English-speaking school during a morning sports lecture. Sarwar died later at a nearby hospital.

Small, 33, was from Cosmopolis, a town in western Washington state near the coast. His father, J. Dan Small, confirmed the death on his Facebook page. "Our oldest, Jeremiah, was martyred in Kurdistan this a.m.," the elder Small wrote.

Eyewitnesses in Iraq described a scene of chaos in the classroom, with some students fainting in fear after gunfire shattered the morning class.

Ahmed Mohammed said he was sitting in the front of the classroom and paid little attention to the argument when it first erupted. He said he could barely hear what was happening because Sarwar was at the back of the room.

"Then I heard the gunshot," said Mohammed, his face pale as he recounted the scene. "I turned my head and saw the body of the American teacher on the ground with blood near it. All the students started to run out of the room. Seconds later, as I was running to the reach the school gate, I heard another gunshot."

A short time later, another student shouted that Sarwar had killed himself, Mohammed said.

"So I rushed back to the class with other students to see the teacher on the ground with three bullets in his head and chest, and bloody, and Biyar with a bullet in his head."

Sulaimaniyah police spokesman Sarkawit Mohammed, no relation to Ahmed, said the shooting appeared to be a murder-suicide, but provided no motive. He said Sarwar hid the gun in his clothes before the lecture at the Medes School, a private Christian academy of elementary through secondary grade level classes.

The Medes program runs three schools in the provinces that make up Iraq's northern Kurdish region, boasting an enrollment of about 2,000 students. According to the schools' website, American staff often teach one or two courses each semester. An estimated 95 percent of the students are from Kurdish Muslim families.

Students described Small as a devout Christian who frequently praised Christianity and prayed in the classroom. However, Sulaimaniyah Mayor Zana Hama Saleh said Small was not a missionary and cast doubt that the killing was motivated by sectarian issues because Sarwar "had no radical religious tendencies."

The Nashville, Tenn.-based Servant Group International, for whom Small worked, confirmed his identity and described him as a beloved mentor to the more than 1,000 Iraqi students he taught since 2005.

Jeff Dokkestul, a Servant Group International board member, said Small was one of nine American teachers at the Sulaimaniyah school, which he said is run by Iraqi Kurds. Although Dokkestul said the groups' teachers are Christian, he maintained that they do not proselytize their students.

"We believe this is an isolated incident, just like (what) happens in the U.S.," Dokkestul said in an interview. He said the school operates "as a Christian school serving the Muslim and Christian community, a mixed community."

Sulaimaniyah is located in Iraq's comparatively peaceful Kurdish region, 160 miles northeast of Baghdad. The Kurdish region has generally been free of the bombings and shootings that have plagued the rest of Iraq in recent years. Foreigners, including American citizens, usually travel freely around northern Iraq without the armed guards or armored vehicles often used in the rest of the country.

A team from the U.S. consulate in Irbil, the Kurdish region's capital, was in Sulaimaniyah to identify Small's body but was unable by Thursday night to do so.

"We have heard reports regarding the shooting of a teacher in Sulaimaniyah and are working through our consulate in Irbil and Iraqi authorities to ascertain the details of the incident," the U.S. Embassy in Baghdad said in a statement. "At this time, we are waiting for identification to be completed and for the family to be notified."

"I'll never forget these cruel moments," said Kamal, who was in the classroom during the shooting. "I have no idea what the motive was — both were good people."