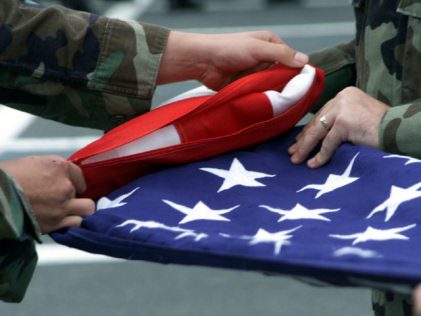 ROHNERT PARK, Calif. -- Soldiers carry them into battle, fly them high over foreign bases, and triumphantly carry them in processions, but those stars and stripes, until now, have often been made in China.

That legislation is now law, signed as part of the 2014 omnibus appropriations bill.

“I thought it was appalling our Department of Defense would have flags made in other countries,” Thompson said. “But it’s also important because we need to be making more in America.”

While the military flag rule passed, a similar bill requiring all government-purchased flags be made in the U.S. has repeatedly failed. The change isn’t cheap. Chinese-made flags cost significantly less than all-American ones.

The new requirements apply the existing Berry Amendment passed in 1941 to flags. That amendment bans the Defense Department from buying food, clothing, military uniforms, fabrics, stainless steel, and hand or measuring tools that are not grown or produced in the United States, except in rare exceptions.

Thompson toured North Bay Industries on Tuesday. The Rohnert Park company makes thousands of flags each year, mainly for the Department of Veteran Affairs, which was already required to source memorial flags made in the United States with American-only materials.

Thompson had visited the Rohnert Park facility last year and found out that not all flags purchased by the military were being made in the U.S, which he said prompted the need for the legislation.