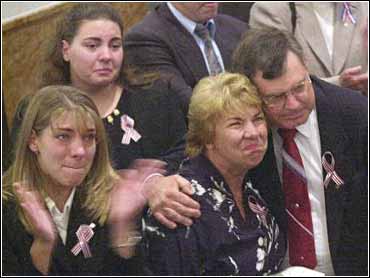 It is a scene repeated in many churches and other houses of worship all over the country.

But in New York, the constant stream of worshippers in and out of St. Patrick's Cathedral is hard to miss.

The doors of the church which is a symbol of hope to many in the city have remained open late since September 11th's terrorist attacks.

Albert Almanza of Arlington, Virginia, says he came to the cathedral to pray because he "doesn't have a clue" about how to cope without God. Another worshipper, also from northern Virginia - Francisco Rivera - says "everybody needs to pray" because the nation "is in bad shape."

The funerals began on Saturday.

In the heart of Manhattan, in Washington's suburbs, in saddened towns elsewhere, mourners grieved and reminisced Saturday at the first wave of services for the terror attacks' victims — a fearless priest, a feisty TV commentator, a mother and her 4-year-old daughter.

A Supreme Court justice spoke at one service, a U.S. senator and former president attended another. Relatives, friends, civic leaders joined in wistful tributes that will be echoed over and over, at hundreds of churches across the nation, in the coming days, weeks and perhaps months.

In New York City, at a Roman Catholic church across from a grief-stricken firehouse, bagpipers played the national anthem after the service for the Rev. Mychal Judge, chaplain of the city's Fire Department. Sen. Hillary Rodham Clinton, former President Clinton and their daughter, Chelsea, were among the mourners.

Supreme Court Justice Clarence Thomas delivered a eulogy in Alexandria, Va., for Barbara Olson, a lawyer, an unabashedly conservative TV commentator and the wife of U.S. Solicitor General Theodore Olson. She was aboard the jetliner tha crashed into the Pentagon on Tuesday.

"Barbara strode boldly through life, full of cheer and verve, shying from no challenge or obstacle," Thomas said. "She was irrepressible in the fullest sense...ignoring all torpedoes and charging full speed ahead."

"This is indeed a sad occasion," the justice added. "One to be repeated thousands of times by our fellow citizens across the country."

Congressmen, federal judges and others from Washington's political elite were among about 1,500 people gathered for the memorial service at Alexandria's St. Thomas Moore Cathedral.

Judge, 68, died Tuesday as he was administering last rites to a firefighter mortally injured in the attack on the World Trade Center. The Franciscan priest had removed his fire hat to pray when he was hit by falling debris.

"He was a saint, a wonderful man," said Mayor Rudolph Giuliani.

The funeral Mass for Judge took place at St. Francis of Assisi Church, across from the firehouse of Engine Co. 1/Ladder Co. 24, which lost seven firefighters in the disaster.

Visiting the firehouse after the service, Mr. Clinton said Judge's vocation was "a rebuke to the act of hatred" that killed so many Americans.

"So all of us who were here this morning feel a special loss," Mr. Clinton said. "We should live his life as an example of what has to prevail."

On any other day, a firefighter killed in the line of duty would draw hundreds of colleagues in dress blue uniforms and white gloves. But as a testament to the round-the-clock work proceeding in the disaster zone, the firefighters attending Judge's service numbered perhaps 200.

The Fire Department's losses, estimated at 300, included many of its top leaders. Funeral services were held Saturday for William Feehan, the department's first deputy commissioner, and chief of department Peter Ganci.

"It gives my family some comfort my father died the way he wanted to with his men. Pete Ganci was a fireman to the bitter end," said Chris Ganci.

"When the tower came down he got his men out," said Giuliani. "He sent them north and he went south right to the danger to get more of them out."

Two services were held in Connecticut towns — both involving parents and small children killed together when United Flight 175 smashed into the World Trade Center.

In East Lyme, Conn., mourners grieved for Ruth McCourt, 45 and her daughter, Juliana Valentine McCourt, 4. A service was held in Easton, Conn., for Peter Hanson, 32, his wife, Susan, 35, and their 3-year-old daughter, Christine.

Hanson had called his parents moments before the crash to say a flight attendant on board had been stabbed.

In Batesville, Ark., a service was held for Sara Low, a flight attendant aboard American Flight 11, which also struck the World Trade Center.

An overflow crowd packed a Landover, Md., church at a service for James Debeuneure, a teacher at Ketcham Elementary in Washington. He was one of three teachers and three students heading tCalifornia on a field trip when their flight from Washington-Dulles was hijacked and crashed into the Pentagon.