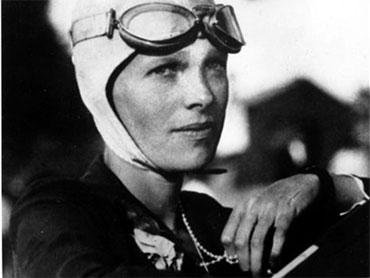 Three bone fragments found on a deserted South Pacific island are being analyzed to determine if they belong to Amelia Earhart - tests that could finally prove she died as a castaway after failing in her 1937 quest to become the first woman to fly around the world.

Scientists at the University of Oklahoma hope to extract DNA from the bones, which were found earlier this year by a Delaware group dedicated to the recovery of historic aircraft.

"There's no guarantee," said Ric Gillespie, director of the International Group for Historic Aircraft Recovery in Delaware. "You only have to say you have a bone that may be human and may be linked to Earhart and people get excited. But it is true that, if they can get DNA, and if they can match it to Amelia Earhart's DNA, that's pretty good."

The remains turned up in May and June at what seemed to be an abandoned campsite near where native work crews found skeletal remains in 1940. The pieces appear to be from a cervical bone, a neck bone and a finger.

But Gillespie offered a word of caution: The fragments could be from a turtle. They were found near a hollowed-out turtle shell that might have been used to collect rain water, but there were no other turtle parts nearby.

"This site tells the story of how someone or some people attempted to live as castaways," Gillespie said in an interview with The Associated Press. Bird and fish carcasses nearby suggested they were prepared and eaten by Westerners.

Lab officials said results of the tests could take week or months.

Gillespie has been traveling to the site since 1989 but acknowledges there's been little progress toward solving the Earhart mystery. It did not help that bones and a sextant box found three years after Earhart's disappearance disappeared themselves after being sent to Fiji.

"It's like science. You take the information you have and formulate a hypothesis, but 9½ times out of 10 you turn out wrong, then you go through the whole thing again - but you're closer," Gillespie said.

Anthropologists who had previously worked with Gillespie's group suggested that he ask the University of Oklahoma's Molecular Anthropology Laboratory to try to extract DNA from the fragments for comparison to genetic material donated by an Earhart family member.

Cecil Lewis, an assistant professor of anthropology at the lab, said the university received a little more than a gram of bone fragments about two weeks ago.

"I think it's best to talk about more when we have something say about it," Lewis said. "Think how disheartened people will be if it's just a turtle bone."

Gillespie said the group had tried to test possible genetic material recovered during a 2007 expedition, but a Canadian lab was unable to extract DNA from dried excrement.

Other material recovered this year also suggested the presence of Westerners at the remote site on Nikumaroro Island, 1,800 miles south of Hawaii:

• Someone carried shells ashore before cutting them open and slicing out the meat. Islanders cut the meat out at sea.
• Bottoms of bottles found nearby were melted on the bottom, suggesting they had been put into a fire, possibly to boil water. (A Coast Guard unit on the island during World War II would have had no need to boil water.)
• Bits of makeup were found at the scene. The group is checking to see which products Earhart endorsed and whether an inventory lists specific types of makeup carried on her final trip.
• A glass bottle with remnants of lanolin and oil, possibly hand lotion.

Some evidence has suggested that Earhart and her navigator, Fred Noonan, landed on the island, but, Gillespie said, "we are constantly agonizing over whether we are being dragged down a path that isn't right."

Still, the island is on the line Earhart planned to follow from Lae, New Guinea, to Howland Island, which had a landing strip and fuel. Gillespie, a pilot, said she would have needed only about 700 feet of unobstructed space to land because her Lockheed Electra would have been traveling only about 55 mph at touchdown.

"It looks like she could have landed successfully on the reef surrounding the island. It's very flat and smooth," Gillespie said. "At low tide, it looks like this place is surrounded by a parking lot."