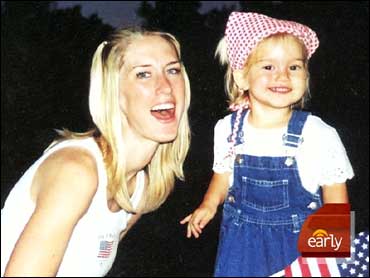 It was Christmas Eve 2002 when news flashed that a pregnant Modesto, Calif., woman was missing.

The case of Laci Peterson would captivate the public. The twists and turns in the story were unimaginable as Laci's husband Scott was tried and convicted of her murder.

She will never forget the moment she stepped out of the shadows and into the media glare, telling the press that she did have a romantic relationship with Scott, but that he had told her he was not married.

"I couldn't catch my breath," she told The Early Show. "I was hyper-ventilating almost, I was scared and it was like 'oh boy here I go.'"

Her words shattered the image of Scott Peterson. The loving husband who seemed so desperate to find his missing wife had actually been having an affair. And Frey's scandalous revelation brought her a barrage of unwanted attention.

"It was bizarre, definitely," she said. "But the big picture was there was a missing pregnant woman and that could (have been) me."

Just weeks earlier Frey was falling in love and celebrating the holiday season with the new man in her life. Peterson was charming, successful and - as far as she knew - single.

But his wife's Christmas Eve disappearance led to a very public search and unbelievable claims by Peterson, who claimed that she knew all about the affair. She was fine with it.

Who was the real Scott Peterson? Frey agreed to record their phone calls as part of the police investigation.

"It was terrifying each time, my stomach would turn and I would pace back and forth," she said.

After police found the bodies of Laci Peterson and her unborn baby, Scott Peterson was arrested and charged with murder. Frey became the star witness against him. Many credit her recordings as the key to his conviction.

When the trial was finally over, all Frey wanted to do was get back to a normal life.

Now she owns The Escape Day Spa in Fresno, Calif. The mother of two is also happily married.

A devout Christian, Frey is also giving back. She has just returned from a ministry project in Mexico building homes for the poor.

No one there recognized her famous face. Back home in California, she is approached by women, most of whom have called her an inspiration. At least one other condemned her actions, telling her "I would have stood by his side, I wouldn't have gone to the police."

Scott Peterson is on death row. He still faces a wrongful death civil suit filed by Laci's parents. Like many others notorious convicted killers, Peterson receives love letters and even marriage proposals from women around the world.