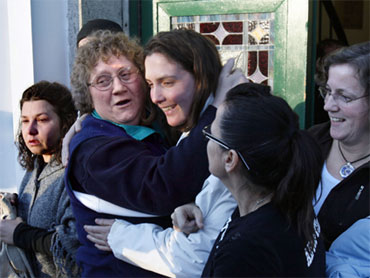 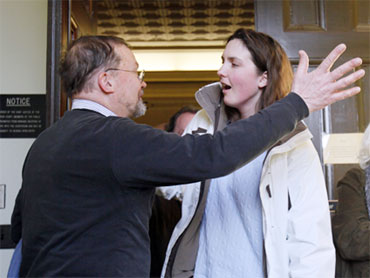 (AP Photo/Robert F. Bukaty)
BELFAST, Maine (CBS/AP) It's not clear why Amber Cummings, a 32-year-old Maine mother, married her Nazi-loving, Obama-hating, child porn-watching, dirty bomb-building husband. But she was crystal clear on why she killed him; she believed he was going to sexually abuse their 9-year-old daughter. Now, a judge has suspended her sentence and set her free.

Cummings was released last Thursday after Justice Jeffrey Hjelm suspended her 8-year sentence for murdering her husband James Cummings in their Belfast home.

During the sentencing hearing, defense lawyer Eric Morse graphically described how James Cummings lived in a sadistic world of darkness and hate where he ridiculed, abused and debased his wife during their decade-long marriage.

The killing drew the FBI's attention after Nazi mementos, radioactive materials and instructions on how to build a "dirty bomb" were found in their home.

Her husband was angered by Barack Obama's election as president and the bomb-making materials were discovered near the time of Obama's inauguration, but law enforcement officials said the public was not at risk.

The Cummings moved in 2007 from California to the coastal town of Belfast, where they bought a fixer-upper at a foreclosure sale. But family life was far from normal, according to court documents, and lawyers and mental health experts who spoke at the sentencing hearing.

James and Amber Cummings slept in separate bedrooms and kept loaded guns under their pillows. He obsessed over child pornography and instructed her to conduct Internet chats to lure women to Maine, according to court documents.

He told people he was fascinated by Adolph Hitler and said he had a collection of Nazi memorabilia.

And he was actively amassing bomb-making materials in the wake of the 2008 presidential election. "His hostility toward her and the world was increasing," Morse wrote in a sentencing document.

On the morning of Dec. 9, 2009, Amber Cummings and her daughter, Claira, woke up early and ate breakfast together, as was their normal routine. The mother then went to her bedroom, where she said she put a gun in her mouth and considered killing herself. Instead, she decided that she had to kill her husband to protect Claira.

She took a Colt .45-caliber revolver, walked into her husband's bedroom and fired two bullets into his head while he slept, then fled with her daughter to a neighbor's home and called police.

A psychologist who evaluated Amber Cummings said the turning point for her was James Cummings' growing obsession with child pornography and her "escalating sense of doom." He often talked to her about his sexual attraction to young girls, and she thought that he was becoming obsessed with their own daughter.

Morse and prosecutors came to a plea agreement, calling for a sentence of up to eight years with Cummings to serve no more than a year in jail, followed by six years of probation. In his sentencing memo to Hjelm, Morse recommended that Amber Cummings serve no jail time.

Assistant Attorney General Leane Zania recommended that Cummings spend a year behind bars. Although Cummings was clearly abused by her husband, a message must be sent that "this kind of 'self-help' is severely anti-social behavior and that it will be punished accordingly," Zania wrote.

Amber Cummings didn't address the court, but three mental health experts who evaluated her urged Hjelm not to send her to jail.

In handing down the sentence, Hjelm said he looked at the case in its entirety and the reasons behind the shooting; not just the few seconds of the shooting itself.

Outside of the courthouse, Amber Cummings thanked people in the community for their support. Her husband was mentally ill, she said, and she didn't want people to be angry with him.