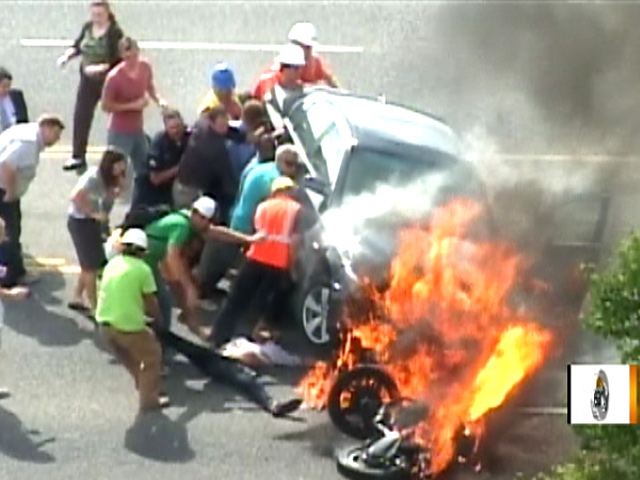 A fiery rescue in Utah was caught on tape Monday.

A car hit a motorcycle in Logan. The bike slid under the car, trapping the rider under the car as flames burst out.

Grad student Chris Garff, who shoots video of lectures and school events for Utah State University, happened to be there when it happened, and began getting the scene on video.

Half a dozen people tried the lift the blazing BMW.

"We were cheering them on, like 'Get that car up! Get that guy outta there!" Garff says.

Then, a flood of people swarmed the car and crane it managed to lift it into the air.

A construction worker dragged the limp body from under the 4,000 pounds of steel.

"It felt like he was motionless for a very, very long. It felt like forever," Garff says. "I thought he was a goner."

But then, as one witness described it, "He's moving! No freakin' way!"

The man, 21, was rushed to a hospital where, police say, he's in stable condition with broken bones and minor burns.