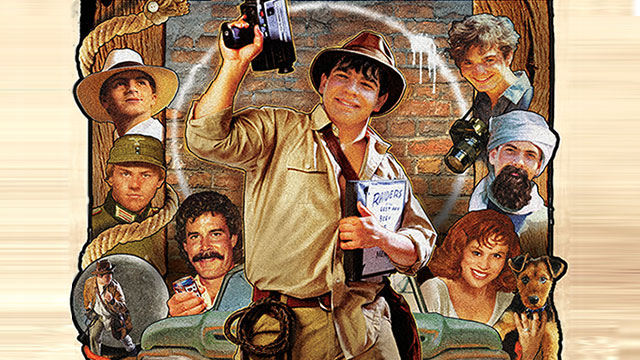 (ETonline) Lots of kids are inspired to make their own version of a movie when they're on a high walking out of a blockbuster on a hot summer day - but Chris Strompolos and Eric Zala and took their obsession much, much further after seeing Raiders of the Lost Ark in 1981. The pair set out to remake the entire Steven Spielberg classic shot-for-shot, and while making the bargain-basement film almost destroyed their friendship, the incredibly impressive final cut has reached cult status and even caught the attention of Spielberg himself.

Watch the first 10 minutes of Raiders of the Lost Ark: The Adaptation HERE.

"It's really something to meet your boyhood hero and find that you've chosen your heroes well, " Eric tells ET exclusively about their meeting with the Hollywood legend, describing Spielberg as "warm and paternal" and detailing how they spent 45 minutes talking about "life and movies" before he treated them to some never-before-seen Raiders outtakes. "It was a real pinch-me moment."

Chris and Eric's incredible adventures are now being chronicled in a new book, Raiders! The Story of the Greatest Fan Film Ever Made, written with Alan Eisenstock, out Nov. 13. "It's an intoxicating idea to have a book written about you," Chris tells ET. "It's no-holds barred. There's some dark stuff in there. Let's bring out the ghosts. It's warts and all."

The pair of former school kids from Mississippi first bonded on a school bus over the Raiders comic book back in the early '80s, and immediately began plotting how to meticulously relive the film on camera.

"It was really born out of a role-playing fantasy, that I just wanted to play Indiana Jones," says Chris, who took on the title role. "It was always our goal from the very beginning to do the entire film."

Eric took on the directing chores and played bad guy Belloq, while eccentric friend Jayson Lamb was enlisted to run the camera and work on the homemade special effects - some straight out of The Anarchist's Cookbook. Armed with a clunky, problematic Betamax video camera (and later a VHS camera), the film's script from Walden Books, an illicit sound recording made in a movie theater, 602 individually drawn storyboards ("It took me the entire summer [to make them]," says Eric), wardrobe and props requested as gifts from their parents, specifically Indy's signature whip and fedora ("Birthdays and Christmases became prop- and costume-0acquiring opportunities," says Eric) -- and of course an unlimited imagination -- the determined filmmakers coerced curious friends like a modern-day Tom and Huck to help realize their production.

"Chris was the outgoing, gregarious guy; I was the skinny, geeky kid -- total opposites on the surface," says Eric. "He had the charisma to draw people in. I was sort of the disciplinarian to keep folks there. That was sort of the yin-yang of the friendship. ... These differences made it work, but it was also a source of conflict."

The epic project made them the best of friends and the worst of enemies, with that conflict, parental intrusion and elemental issues threatening to shut down the production over and over. Battling lens-fogging issues and camera breakdowns due to the Mississippi humidity, the boys set out each summer to lovingly recreate every special moment of Raiders, from the giant rolling boulder (made of fiberglass) to the fiery bar fight in Nepal (after almost burning down their basement, "We sort of learned to keep our parents in the dark," says Eric), to Indy's incredible truck fight with the Nazis (achieved by towing an engine-less truck that they found abandoned in the mud) and the face-melting grand finale (with swirling ghost effects achieved with the help of a water tank and the high-tech help of the local TV station's editing equipment).

"We didn't really have a budget; we built stuff, found stuff, dug through our parents' closets and Goodwill, Salvation Army, people throwing things away," explains Chris, who estimates that the project cost them approximately $5,000 when all was said and done. "Lots of donated time, lots of donated energy, lots of people pitching in."

Raiders of the Lost Ark: The Adaptation finally found its way to Steven Spielberg courtesy of filmmaker Eli Roth (of Hostel fame, who got ahold of ragged copy from a friend) and, after watching it not once but twice, the cinema mastermind sent both Chris and Eric personalized letters, calling their labor of love "hugely imaginative" and "very loving and detailed." He later said of their film to the press, "To this day ... still the best piece of flattery George [Lucas] and I have ever received."

Chris says that Spielberg told them that their film even "inspired" him, and adds of their personal encounter with him, "He was warm and gracious and he's continued to be supportive, year after year, of our movie."

So what do you do for an encore after such a journey? Now both dads with their own families, Chris and Eric have reunited to form their own production company called, naturally, Rolling Boulder Films -- writing scripts, optioning projects and producing films, with a new action-adventure called What the River Takes in the works, which has a "Southern Gothic flair" set in their home state of Mississippi.

And, needless to say, the two friends tell ET that they are extremely excited to get their hands on the new Indiana Jones: The Complete Adventures Blu-ray that comes out this week. Chris proclaims with his trademark determination, "That'll be on my shelf soon."