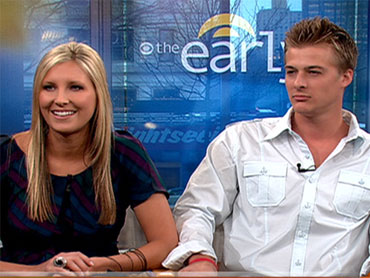 The winners of the latest version of the CBS reality "The Amazing Race," Meghan Rickey and her boyfriend, Cheyne Whitney, got their prize in the form of a $1 million check on On "The Early Show" Monday.

Whitney joked about the oversized check, "Where do I sign?"

The couple prevailed in the 15th edition of the Emmy Award-winning show, which has contestants racing around the world while collecting clues and completing tasks.

In the finale, televised Sunday, they beat two other couples to the finish line by being quickest to count out $1 million in chips at a Las Vegas casino.

Rickey said the final leg of the race was "completely different."

She said, "This entire time we were racing to not be in last place, and so this last leg was when we were actually racing for a million dollars."

The final three teams appeared on "The Early Show", including second-place finishers Dan and Sam McMillen, bickering brothers who recently revealed to each other that they're gay, and third-place finishers Ericka Dunlap, former Miss America 2004, and her husband, Brian Kleinschmidt.

Dan McMillen said his best memory of the competition was the challenge of finding items in a haystack.

"We loved our edit," Dan McMillen said. "We loved how it was one extreme, to then me crying. So we were very happy with the results. We loved seeing our brotherly bond show out."

Sam McMillen added, "Siblings fight, that's a huge part of family life, for us, especially. But at the end of the day, we're still best friends. We still love each other to death."

As for Dunlap and Kleinschmidt, who came in third place, Dunlap said the temper seen in the race comes from being close to your spouse for so long.

"Come on, you can be no more than 20 feet away from your spouse for 30 days," she said. "Nobody does that. So yeah, you're going to be a little bit tempered, but hey, we're still together."

"The Amazing Race," which sends 12 two-person teams around the world in a series of pulse-pounding competitions, is a steady ratings performer for CBS on Sunday nights and has won seven Emmys for best reality show. Competitors darted through eight countries in 21 days, starting the final episode in the Czech Republic city of Prague.

All three couples in the finale were on the same airplane flight to Las Vegas, where the show's last leg was a race around casinos. They had to collect clues from an Elvis Presley impersonator, rappel down the side of the Mandalay resort and retrieve a bouquet by bungee jumping onstage where Cirque du Soleil performs.

Rickey and Whitney, 23-year-old students who have known each other since grade school and have dated for several years, dominated several legs of the competition. And things looked good for them when they were in first place after the bungee jump.

Their next clue was to go to the resort named for the most famous casino in Monaco. Yet a clueless cab driver sent them to the Venetian resort instead of the correct one, the Monte Carlo. They were in third place when they got to the right place, where they were to count out $1 million from a huge pile of chips.

But while nerves got the best of their competitors, Rickey and Whitney quickly reached their goal and were sent to find Mr. Las Vegas, who was to tell them the finish line. When they located entertainer Wayne Newton, he told them the finish line was at his house.

One embarrassing moment for Mr. Las Vegas: The McMillen brothers blanked on his name when they met him.

A frantic cab ride later, and Rickey and Whitney raced across the finish line.

"This has been such a learning experience," Rickey said. "Every step of the way it has been so neat."

It was a frustrating finish for Dunlap, driven to tears by her difficulty in the bungee jumping competition. But Dunlap, who is black, said she hoped the show melted away some of her family's resistance to her husband, who is white.